Past, future meet at Lester’s Chapel 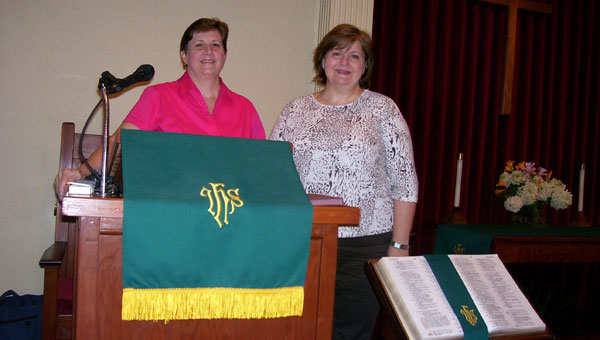 The Rev. Sheree Elliott, left, new pastor at Lester’s Chapel United Methodist Church, and Joan Lester Garrett, historian, are working on plans for the church’s homecoming and plans for reaching out to the community. (Contributed)

At Lester’s Chapel United Methodist Church in Chelsea, the past is meeting the future, said long-time member and unofficial historian Joan Lester Garrett. The church building was recently listed in the Alabama Register of Landmarks and Heritage, and shortly thereafter the congregation was appointed its first female pastor, Rev. Sheree Elliott.

“She has a lot of new ideas that we’re excited about,” Garrett said. “We’ve added that new building and we want a way to use it.”

“They want to do things to get involved in the community,” Rev. Elliott added. “In the past, Lester’s Chapel has been looked at as a family church, but they want to reach out and grow. They have really reached out to me. They have been very accepting of me (a woman) as their pastor.”

Lester’s Chapel has some healing to do, she said, and she believes that as a woman, with a softer side, she offers that to them.

Rev. Elliott has a daughter in graduate school at the University of Alabama, and her son will enter Auburn University this fall.

“So I’m an empty-nester,” she said. “I see this as a new beginning for all of us here at Lester’s Chapel.”

Rev. Elliott began her ministry in 1988 as a youth minister. She began full-time ministry in 2003 after graduating seminary at Candler, Emory University. She served as a senior pastor in Huntsville before moving to Chelsea.

“I feel like I’m coming home,” she said. “I’m from the Bluff Park area and went to Berry High School.”

Lester’s Chapel was established in 1837 when Alfred Musgrove Lester, wife Mary Ann Poindexter Lester and other companions came by wagon from South Carolina to settle the land recently ceded to the United States by the Creek Indians. They built log cabins and a one-room church building, known as Lester’s Chapel.

In 1950, the congregation erected a new chapel, and in 2005 they completed an 8,000-square-foot addition. The new addition has a multipurpose room with a basketball half-court and large stage for church and community functions, kitchen and serving area, restrooms, library and large meeting room, which will later become a sanctuary extension.

The church, located on Shelby County 47, will celebrate its heritage and new beginning at homecoming activities on Aug. 14, beginning at 10:30 a.m. There will be a covered dish dinner at noon. For more information, call 678-6259.