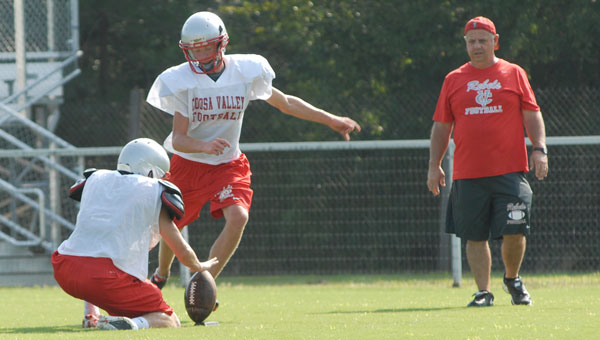 Coosa Valley Academy senior Cody Garrett felt more pressure in the Rebels’ preseason practice Aug. 1 than he did in the Alabama Independent Schools Association Class 1A  championship game a year ago.

Garrett, the Rebels’ placekicker, was charged with ending team practice in the near 100-degree heat by ending a suicide drill with a perfect extra-point attempt.

It took Garrett and his teammates several attempts, but the senior finally placed a kick within the uprights to send the team to the locker room to prepare for team pictures.

The scene in Harpersville was repeated across Shelby County on Monday as high school football teams in the state of Alabama opened fall camp in preparation for the upcoming 2011 football season.

The Rebels, the defending AISA Class 1A champions, open the season Aug. 19 on the road at Springwood School in Lanett. Kingwood Christian will host Ellwood Christian of Selma in its season opener Aug. 19.

Teams in the Alabama High School Athletic Association will open their regular season Aug. 26-27. Preseason jamborees are scheduled for Aug. 18-19.