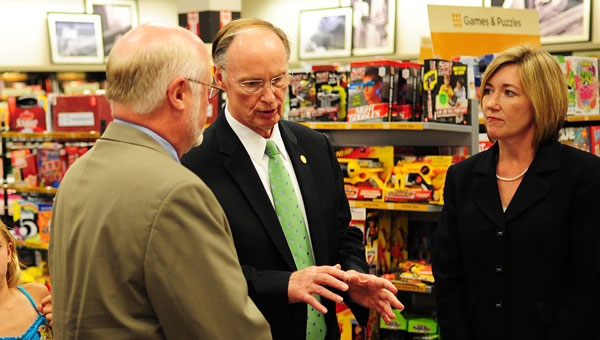 Alabama Gov. Robert Bentley, a Columbiana native, made a stop in Alabaster during a cross-state tour Aug. 2 to promote what he called one of the state’s “most important” weekends.

Bentley spoke for about 30 minutes during a press conference at the Books-A-Million store in Alabaster’s Colonial Promenade shopping center as a crowd of about 20, most of whom were public officials and members of the media, gathered inside the store.

Earlier in the day, Bentley stopped in Mobile, and was traveling to Hackleburg when he left Alabaster.

Bentley’s stop came a few days before Alabama’s sixth-annual sales tax holiday weekend, during which the state and many of Alabama’s counties and municipalities will not charge their usual sales taxes on many back-to-school items, such as certain clothing items, school supplies and some electronics.

Shelby County and most of the county’s municipalities, including Alabaster, are participating this year. The tax-free weekend will begin at 12:01 a.m. on Friday, Aug. 5, and will end at midnight on Sunday, Aug. 7.

Bentley, who was a member of the Alabama Legislature when the tax holiday was passed in 2006, said the issue met some opposition before it was signed into law.

“The argument was that it was taking money out of the education trust fund, which is true,” Bentley said. “But it resulted in folks spending more money on items that did not have the tax taken off.”

Bentley said the state usually sees higher sales tax revenues during the weekend than it did before the sales tax holiday was observed.

“We looked at it in 2006, and there was an increase in taxes that weekend because people got out and bought other items that were taxed,” Bentley said.

Bentley said the tax holiday is important for families who are struggling to prepare their children to go back to school.

Rick Brown, president of the Alabama Retail Association, said the holiday can also help those who are not back-to-school shopping.

“If you’re 100 years old and you get a dress, or if you have a baby and you get diapers, you will save money,” Brown said, noting the tax-free weekend is usually second only to Black Friday. “There are 10 percent savings in some areas. That’s a big savings.”

To see a full list of counties and municipalities participating in the tax holiday, visit Alabamaretail.org.

TIS holding Meet the Teacher for its nearly 1,000 students

By NEAL WAGNER / City Editor Thompson Intermediate School will be giving its nearly 1,000 students and their parents a... read more