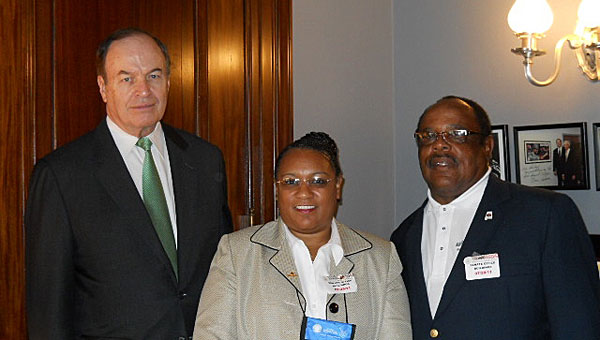 The director of an Alabaster center for at-risk youth recently returned from a trip to the nation’s capital, where she sought support for the program from several of Alabama’s congressmen.

Cindy Hawkins, director of the Kids First Awareness 21st Century Community Learning Center off Simmsville Road in Alabaster, attended a three-day workshop in Washington D.C. after she was invited by the U.S. Department of Education.

Kids First Awareness is an after-school and summertime resource center aimed at at-risk Alabaster students, and regularly holds programs to improve the grades, behaviors and study habits of children who are struggling in school.

During the trip, Hawkins stayed in The Gaylord Hotel and Convention Center in National Harbor, Maryland, which Hawkins called “one of the most beautiful locations.”

Educators from all over the country attended the workshop, and learned about philanthropic and government education programs, and learned effective ways to work with similar programs in their areas.

“They instilled in me how important it is to network with our local and national partners to inspire, educate and train our youth for college and the work force for the 21st century,” Hawkins said, noting she also attended classes detailing federal reporting requirements and other topics.

“Michael Staley, chief of staff for Congressman Bachus, provided me the only White House tour pass the Congressman had for the month, and provided a private tour of the House of Representatives,” Hawkins said.

Hawkins also said she told sens. Jeff Sessions and Richard Shelby about Kids First and the 21st Century programs, and sought their support for the center’s programs.

“They were proud of what we have accomplished, and asked how they could help. So you know I informed them how they can help,” Hawkins said with a laugh.

“Hopefully, my trip will bring us some more support,” Hawkins said.

By WESLEY HALLMAN / Sports Editor The Shirley-Holloway American Legion Post 131 baseball team, based in Columbiana, wrapped up its... read more