Past gridiron stars to face off in county 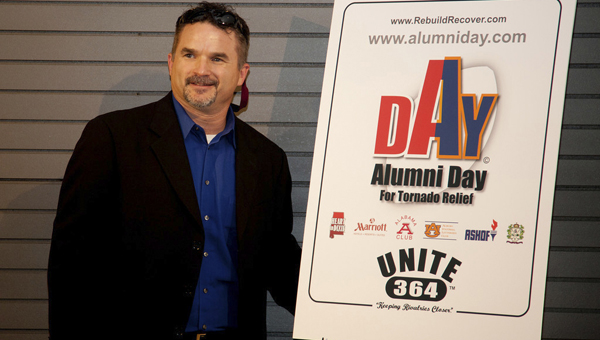 Fuhrman, who played for former Alabama coaches Ray Perkins and Bill Curry from 1985-1988, was at his home near Atlanta, Ga., when he received a wake-up call from his in-laws in Monroe, La.

Fuhrman’s in-laws had lost the roof on their home in an early morning storm and were alerting his family to the weather system moving throughout the Southeast.

By the end of the day, more than 60 tornadoes claimed nearly 250 lives in one of the worst severe weather outbreaks ever recorded.

Many lives were taken in Tuscaloosa, where Fuhrman held several memories close to his heart from his playing days for the Crimson Tide.

“It was the most devastating thing that ever happened” in Tuscaloosa, Fuhrman said. “I’ve never seen as much devastation in my life.”

Fuhrman then became determined to help out recovery efforts. He didn’t know where to begin, but he figured returning to his roots as a former Alabama player in a college football frenzied state was the best way to get the ball rolling.

Fuhrman and his former teammates came up with a few ideas, including an Alabama vs. Auburn football alumni game and a pick-up basketball game involving former Alabama, Auburn and UAB football players.

In the end, the idea of a HeartinDixie Foundation flag football game between former Alabama and Auburn players became an actual event, which will be held Aug. 13 at 7 p.m. at Jaguars Stadium at Spain Park High School.

A charity benefit auction at the Birmingham Marriott and a charity pro-am golf tournament on the Founders Course at Greystone Golf and Country Club were also added to the itinerary to help out storm victims across the state who are still recovering from the devastation.

The HeartinDixie Benefit and Pairings Party will take place Aug. 14 at 6 p.m. at the Birmingham Marriott at 3590 Grandview Parkway.

The HeartinDixie Charity Golf Pro-Am will begin Aug. 15 at 10 a.m. at the Greystone Golf and Country Club Founders Course.

Fuhrman said North Shelby County was the best site for the trio of events due to its close proximity to Interstate 65, Interstate 459 and U.S. Highway 280.

“We chose (the area) for its easy access,” Fuhrman said. “It’s the best location.”

The event is expected to draw some of the biggest names from both the Alabama and Auburn football families.

Alabama Power will also host a fan zone before the game on the practice field. There will be inflatables, games and autograph signings starting at 4:30 p.m.  The fan zone is included in the ticket price.

For tickets and more information about the event, visit Rivalsuniteforrecovery.com.

All proceeds from the events will benefit The Governor’s Emergency Relief Fund. More information on the fund can be found online at ServeAlabama.gov.

FROM STAFF REPORTS The University of Montevallo athletic department, in conjunction with the university’s mass communications department, has announced it... read more