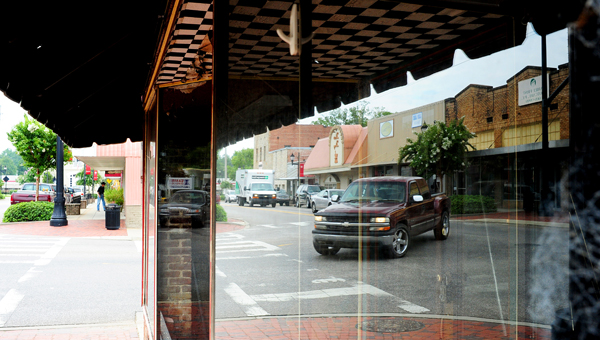 Downtown Columbiana is reflected in a window of a closed business. (Reporter Photo/Jon Goering)

“Sometimes you can’t see the forest for the trees when you’re only in Columbiana,” City Councilman Jim Strickland said. “Columbiana is not unique to having some empty stores. I have confidence they will refill.”

Strickland, who represents District 3, was a Columbiana mayor in the 1980s. He also owned a clothing and shoe store in Columbiana for 27 years. He’s now a commercial realtor.

When it comes to business development, Strickland said Columbiana is in a “transitional state.”

“You’ve got a lot of folks that in the past have maybe leased or rented property that are now building and buying property,” he said. “The perfect, most visible example is CVS. They were on one corner leasing property and then bought the other corner and spent more than a million dollars on that.”

CVS wouldn’t have constructed a new building “if they didn’t feel they would be getting a return on their investment,” he said.

“He wouldn’t be doing that if he didn’t feel good about it,” Strickland said.

“Really and truly, we’re blessed in Columbiana to have what we’ve had come and go in the past year,” he added. “There’s good activity. Would I like it to be more? You bet – but I’m thankful for what we’ve got.”

Historically, Columbiana has been the home of locally owned businesses. Columbiana Mayor Allan Lowe said some of those businesses grew out of hobbies and were lucrative niche-market operations during good economic times.

“However,” Lowe said, “such businesses usually don’t fare well when the discretionary income dries up.”

Handley, who represents District 2, said the city is “constantly on the lookout,” but noted the downturn in the economy has businesses afraid to make moves right now.

“I feel like maybe we’re going to have to change gears,” he said. “We’ve been trying to compete or at least be a shopping area, and we can’t compete with Calera and Alabaster and Pelham for that. I think we’ve got to reinvent ourselves.”

Handley said Columbiana needs to make itself a destination city, and that “entertainment” is the best way to do that. Restaurants, he said, are a form of entertainment.

The city, he said, should start with small entertainment options like coffee shops, pastry shops and hot dog stands. He said the city “lends itself towards those things” and could use them to “snowball” the effort from there.

Columbiana already has the George Washington Museum and the Shelby County Museum, which give the city a “historic feel” and work to its advantage.

“We have got the perfect setting for all kinds of things that will draw people,” Handley said. “Our thoughts on what Columbiana is are going to have to change.”

Hiking, biking and riding trails would be a nice addition, he said.

Handley, an optometrist with an office on Main Street, said that 80 percent of his patients come to his office from outside of Columbiana. Getting those people to stay in the city and spend their money here is the challenge, he said.

The South Shelby Chamber of Commerce, for its part, has several programs aimed at recruiting businesses to Columbiana. The chamber has a bulletin board located in Columbiana City Hall. Posted there are all the properties available in Columbiana.

In addition, the chamber also provides demographic information to potential businesses, based on census figures, according to Stacy Walkup, executive director of the chamber.

“Columbiana is a little, friendly town,” Conn said. “We have to have growth to keep in business.”

She said businesses need more walk-in foot traffic. She said foot traffic has decreased with the economic downturn, but added it was never that great to begin with.

More customers are needed, she said.

The man with the ‘light green’ thumb