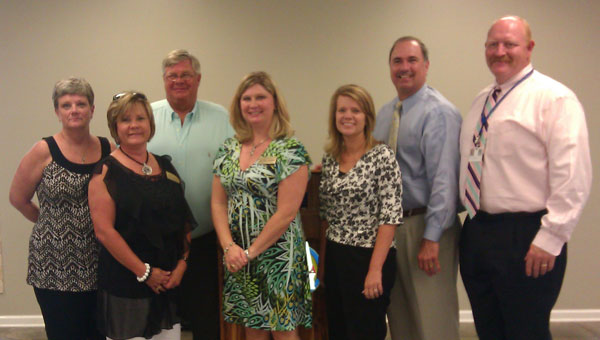 RE/MAX realtor Eddie Williams, back left, shared his insight of the housing market with Calera Chamber members at a July 13 luncheon. (Contributed)

“Eddie was a teacher and football and basketball coach for 25 years, Mobley said. “He sold young men on believing they were better athletes than they physically were. He had the gift of encouragement and motivation where he got more out of the young men than the physical talent displayed.”

Williams has a passion for helping individuals, businesses and communities max their potential. For 32 years, he has been involved in developing subdivisions in Calera and throughout the state. Speaking of the current housing market Williams said, “When you change the way you look at things, the things you look at will change. I got my real estate license in 1979, and I’ve seen growth, depression and recession. I’ve seen three of them, so my attitude about the real estate industry is whatever you think it is, get over it. There’s not a whole lot you’re going to do about it.”

At one time, the Greater Birmingham Home Builders Association boasted more than 600 builders. Today, there are not six builders who are solvent enough to borrow money to build a spec home. Williams reported 80 percent of jobs in the U.S. are affected by the housing industry.

He told why his company chose Calera over larger cities.

“All of our market research showed this is a positive growth area, he said.

“Only two metropolitan areas showed positive growth — Calera and Hoover. Our company has captured 39 percent of the new home sales in Calera.”

Positive media coverage of our schools and community is the key to selling houses. Calera is a great community, and statistics show that kids who start elementary school here will go to high school here. It is important to maintain a good athletic program for boys and girls because it gives an assumption the academic program is successful. Athletics, parks and a good library are all essential to a well-rounded community.

Williams credits his success to doing things the right way and surrounding himself with good people. He left business owners with this advice: employ individuals who display positive perception for your company and reward them. Don’t be afraid of change and have a plan for success and execute it.

Williams can be reached by phone at 966-0967 or email at ewilliams_remax@mindspring.com.