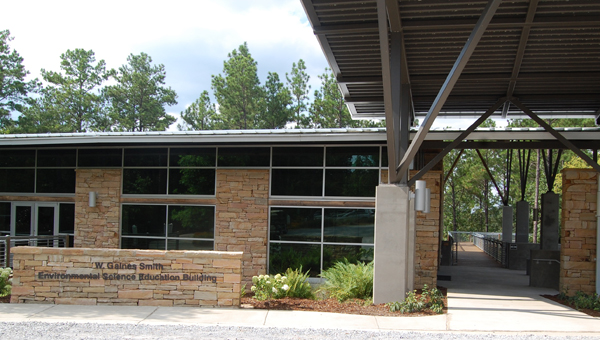 COLUMBIANA – A building at the Alabama 4-H Center has been named in honor of the longtime director of the Alabama Cooperative Extension Program.

“I could never have dreamed of this occasion here when I started my 4-H experience in 1952 as a 4-H member at Hicks Memorial School in Autauga, Alabama,” Smith said in remarks to the more than 60 people gathered for the occasion. “It’s a long way from there.”

Smith’s extension leadership has spanned 45 years. He has held leadership positions at the county, district, regional and state levels. He led the extension program through times of tight budgets, organizational downsizing and the redesign of the programming process. 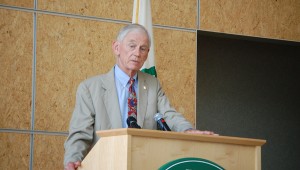 Smith, who currently serves on the National 4-H Council Board of Trustees, said he was “overwhelmed” and “honored” to have the building named in his honor.

The building, which opened in 2007, is the first gold-certified Leadership in Energy and Environmental Design environmental education building in the eastern United States. The two-story building has 17,500 square feet.

“Without Gaines Smith and his unshakeable belief in the needs of our youth and this center, this building could not and would not have been built,” said Jack Odle, immediate past chairman of the Alabama 4-H Club Foundation’s board of directors. “He never waivered in his support.

“Gaines was our rock that kept us held firmly together as we moved forward with this project,” Odle added. “He was our beacon of light that showed us the way through some dark and winding and treacherous paths. And he was our lineman that cleared a lot of red tape of the bureaucracy that invades a project of this size and scope.”

Thomas Elliott, the chief financial officer of the Alabama Cooperative Extension System, said Smith has supported extension programs by allocating extension funds, personnel, equipment and supplies – and even his own money.

“He also dug into his personal pocket many times and found ways to support the 4-H program,” Elliott said.

Smith said the extension system takes “a lot of pride in this building here.”

“It took a lot of people to come together to make it happen,” Smith added.

Pelham officer goes ‘above and beyond’