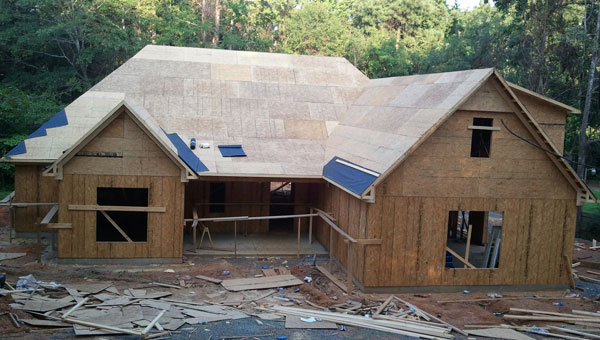 A group of volunteers working to build a new house for a THS graduate who lost his grandfather in a tragic 2010 accident recently crossed a “big hurdle” in the project, and are looking for specialized help in completing the project by the end of the year.

On Dec. 6, 2010, THS graduate Josh Carden’s 73-year-old grandfather, Tommy Pickett, died after he was struck by a vehicle while crossing the road in front of his house on Fulton Springs Road to help Carden cross the street.

After hearing about the accident, during which Carden, who has cerebral palsy, lost his primary caregiver, several local volunteers began looking for ways to help the family.

After looking into the matter, the volunteers were able to negotiate a land swap with Alabaster resident Rick Blaising. Through the swap, Blaising gave the group a quiet plot on Washington Lane, which is off Butler Road in Alabaster, in exchange for the family’s current property in a heavy industrial area.

After breaking ground on the new house in April, the group has used volunteer labor and donated materials to steadily make progress on the new home. On Aug. 7, crews completed the house’s frame.

“The biggest hurdle we had was getting the frame up. When that got done it was big, because the project is turning into a reality now,” said Jeff Brooks, who worked to organize the project. “Now, it’s not just breaking ground, or a bunch of people with an idea. It’s tangible now. It looks like a house.”

Since the group announced its project, many volunteers and local companies have stepped forward to lend a hand, Brooks said. BB&T named the house one of its Lighthouse Projects, and has provided labor and donations for the house.

Alabaster First United Methodist Church donated its Easter offering to the project, and has provided project volunteers with water and other surplus items gathered during the church’s tornado relief efforts.

Because contractors have completed much of the house so far, project organizers have not been able to use other volunteers extensively up to this point.

“We have really had a lot of community support. A lot of people have wanted to help with the labor, but we haven’t really had a ton of work they could do up to this point,” Brooks said. “But now, we can really start using volunteers.”

The group’s main need now is for skilled brick masons to lay 15,000 bricks around the house, Brooks said. To volunteer for the project, visit Facebook.com/joshproject, or call Brooks at 913-4449.

Brooks said it is difficult to put a timeline on the project’s completion, as the group is reliant on volunteers and donations.

“I can say that our goal is to have it finished by the end of the year, for sure,” Brooks said. “We have kept the (Carden) family updated on the project, but we haven’t given them a detailed day-by-day status update.

“When it gets done, we still want there to be an element of surprise for them” Brooks added.

Mother Nature has a good laugh

Before finding an open staff writer position with the Shelby County Reporter, I worked as an intern for Oxmoor House... read more