Pelham officer goes ‘above and beyond’ 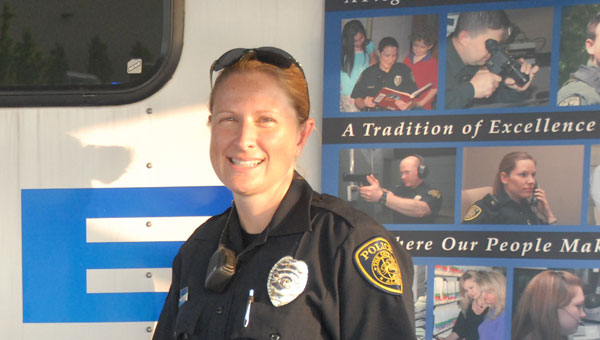 When Pelham resident and real estate agent Marilyn Seier saw the yellow “low tire pressure” light illuminate on the dash of her new Lincoln on Aug. 4, she knew her day was about to get more difficult.

Seier was driving on U.S. 31 in Pelham, and was coming home from a real estate event at about 6 p.m. when the light came on.

“I pulled into a vacant car dealership and got out. Sure enough, my rear tire was flat,” Seier said. “I just got a new Lincoln, so I called Ford Motor Assistance. They said they would be there in about 45 minutes.”

Seier then raised the trunk of her car to signal the roadside assistance crew, and began waiting in the triple-digit heat for the crew to arrive.

Several minutes later, Seier noticed a Pelham patrol car pull up behind her. Pelham officer Debbie Warner then exited the police car and asked Seier if she needed any assistance.

“I told her that I was just waiting for the Ford Motor Assistance, and she said ‘Don’t worry, I will change your tire for you,’” Seier said. “By the time she got the tire changed, the motor assistance guys still hadn’t got there.

“My dad taught me how to change a tire when I was 16 years old, and I’ve had to do it once the entire time I’ve been driving,” Seier added with a laugh.

Seier said Warner was “polite and courteous” throughout the incident, which prompted Seier to notify Pelham Mayor Don Murphy.

“She really went above and beyond the call of duty,” Murphy said of Warner, who was out of the office the week of Aug. 8-12. “She didn’t have to stop and help. Nobody would have faulted her if she didn’t.

“Even after she found out roadside assistance was on the way, she still insisted on helping Mrs. Seier out,” Murphy added. “I think service and professionalism like that needs to be recognized.”