‘Something new’ at Wilton Baptist 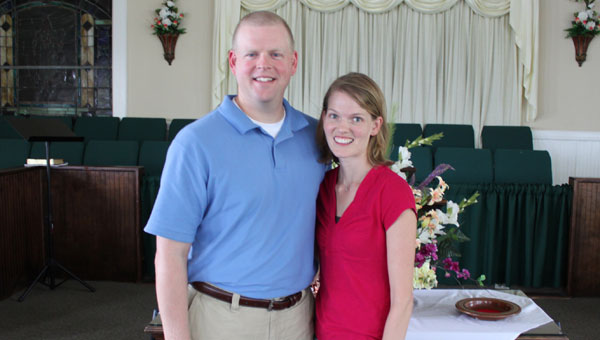 Bryan Stewart will serve Wilton Baptist Church as the new music minister and youth pastor. His wife, Erika, will accompany his music ministry on the keyboard. (Reporter photo/Christine Boatwright)

WILTON – As of last week, a new, smiling face can be seen around Wilton Baptist Church, as Bryan Stewart joined the church staff as music minister and youth pastor.

Stewart and his wife, Erika, moved from Auburn when Bryan saw an ad in a local paper for an open position in Wilton.

“I talked to the pastor, and I really liked him and the church,” Stewart said. “We were praying where God would have us. We wanted a place where we could give with our talents, and we felt peace about coming here.”

Stewart will be working with the youth of the church, while his wife, who has played the piano since she was 5 years old, will accompany his music ministry via keyboard.

“I have a desire to see people reach their full potential,” Stewart said. “I don’t want people to think, ‘Because my grandparents and great-grandparents came here, I have to come here, too.’ I want to enable people to have a relationship with God.”

Pastor Greg Sellers, who has been leading the church for two years, said it was “obvious” when he met Stewart that he was supposed to be a part of the Wilton church’s family.

As for future goals, Stewart said he wants to see the youth of the church become a team.

“As they grow, I want them to become a team and knit together and serve their church and their community,” Stewart said. “I have a big heart for missions, and I know it starts with one person.”

In his ministry as the music leader, Stewart said worship brings people before God.

“Music draws us and prepares us to worship God,” he said. “I’m not opening a book and saying ‘Let’s sing these today.’ I pray over it. It’s about worshipping God. It’s not for entertainment or a show.”

Sellers said he feels God is doing something with the church.

“It’s kind of a new season for our church,” Sellers said. “God’s lining us up to do his work in the way he desires. I’m not sure of what he’s doing, but he’s doing something new.”

Mary Hedrick of the county's IT department oversees the computer system for the Harrison Regional Library. She bought the library's... read more