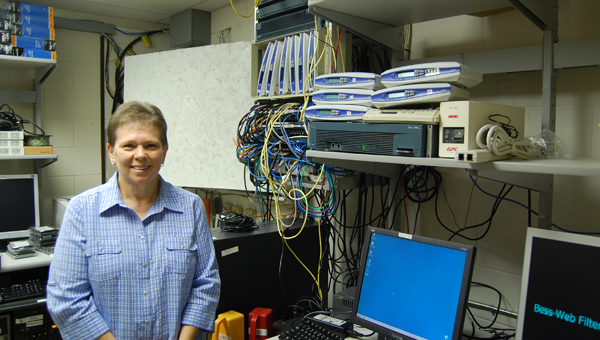 Mary Hedrick of the county's IT department oversees the computer system for the Harrison Regional Library. She bought the library's first computer in 1987. (Reporter photo/Brad Gaskins)

COLUMBIANA – Twenty-four years ago, the Harrison Regional Library wanted to buy a computer to help with accounting duties.

Mary Hedrick, then a cataloger at the library, sold donuts outside a bank to raise the couple thousand dollars needed to buy a Tandy from Radio Shack. It was library’s first computer.

These days, when Hedrick considers how much technology has changed the library since 1987, she said one word comes to mind: “wow.”

The Shelby County Public Library System now has 254 computers throughout its 14 libraries. From social networking to job hunting to research for college classes, library users have embraced the new technology. In 2010, 86,000 people used the library’s computers.

“Today, computers are as much a part of the library services we provide as the books on the shelves,” Hedrick said.

Hedrick has worked for the county’s IT department since May 2007. In that role, her primary responsibility is managing the library computers.

Through networked public access computers, library users can look for jobs and print resumes. In the last two years, the library has seen “a remarkable increase” in the number of people using computers to look for jobs.

Harrison Library interconnects the 14 libraries in the county through a shared catalog and filtered Internet connectivity to staff and public access computers. All networked public computers have Microsoft Office, Internet Explorer, Firefox and links to the Alabama Virtual Library. Links are also provided for seasonal needs such as IRS tax forms.

For library users who aren’t familiar with computers, the library will help.

“People that are not computer savvy, if they need help all they have to do is make us aware,” Hedrick said.

Some people are reluctant to ask for help, she said, so library staff always keeps an eye on computer users, and will offer assistance if it become visibility obvious the user is having trouble operating the machine.

Columbiana resident Vicky Hollback, now 47, graduated from Jeff State in May 2011. She said she used the library computers to complete much of her online coursework.

“Having to learn the computers at this age was hard to do,” Hollback said. “The staff is wonderful. If one of them doesn’t know the answers, they’ll go find somebody that does know and can help.”

Computers for kids are available at several libraries. The computers do not have Internet access, but do have learning activities in math, reading and other age-appropriate subjects. The number of computer stations decreased throughout the years.

“Children are more sophisticated than they used to be,” Hedrick said. “They know what Disney.com is.”

Through a partnership with the Middle Alabama Area Agency on Aging, the Harrison Library offers weekly individually scheduled courses on using the Internet for senior adults.

The Shelby County Public Library uses the Polaris integrated library system (ILS) to keep records for all library patrons, keeps track of library inventory and even has an automated system that will either call or email users when a library book is overdue.

FROM STAFF REPORTS The University of Montevallo women’s volleyball team has announced the signing of five recruits for the 2011... read more