A UM ‘institute and icon’ passes away 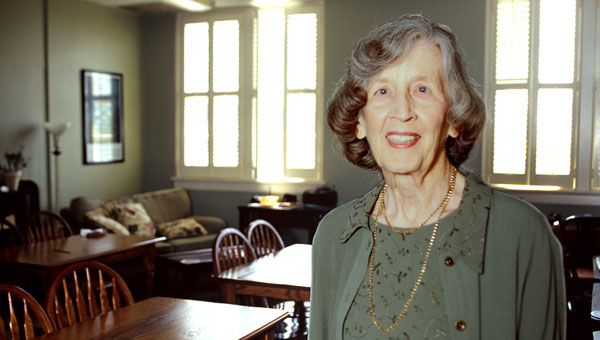 Sarah Palmer taught at the University of Montevallo for 32 years. (Contributed)

MONTEVALLO – Former University of Montevallo English professor Sarah Palmer served the university for 32 years, touching many lives with her love for classical music, the written word and education. Palmer passed away Aug. 8 at her home in Catawba, N.C., surrounded by her family.

“Sarah Palmer was a gifted and dedicated teacher who worked tirelessly to guide each of her students to achieve their full potential,” said Sandra Lott, a retired UM English professor. “Sarah was the kind of person who transformed the lives of those around her.”

“If there are angels on earth, Sarah Palmer was one of them,” said King, who is currently a UM English professor.

While King remembers Palmer as an “angel,” she also said Palmer had a sense of humor.

“She was also a mischievous angel. She was not all sweetness and light. She had a very sardonic sense of humor, and she knew when to use it,” King said. “Some of her students thought she was the sweetest little old lady in the world, but she was also not so keen on shabby and lazy work. You had to be able to read her to know.”

Palmer began her teaching career in Phenix City from 1940 to 1942, and then taught at Auburn University from 1942 to 1943. She taught high school English classes at Chilton County High School from 1944 to 1968. She began career at UM as a part-time assistant professor in 1967, and became a full-time professor the next year. She retired in 1989 as an associate professor. She then returned to the university as a part-time adjunct instructor and master tutor in the Harbert Writing Center for an additional 11 years.

King recalled when she first began to teach at the university in 1989, and as Palmer had been teaching since 1967, King said she was “already an institute and an icon.”

“Sarah was doing things like leaving mason jars with gardenias on my front porch with notes attached,” King said. “There will be no more like her. I got to know her pretty well over the years. I was lucky that way.”

“She just made it easier to be alive,” King added. “I don’t think she was aware she was inspiring.”

The English Commons area on the second floor of Comer Hall was officially named the Sarah G. Palmer Commons in 1989, as Palmer spent time filling the space with paintings and antiques. Also, a scholarship in Palmer’s name was created to assist the education for returning adult students to the university.

“She believed deeply, fundamentally in the power of education to change people,” King said.

King and Mary Jo Buff, a former student of Palmer’s, both mentioned how strangers would see their connections to the university and ask if they knew “Mrs. Palmer,” as everyone called her. King said, on more than one occasion, repairmen in her home would say Palmer taught them years ago, and one said when he hears Mozart, he still thinks of Sarah Palmer.

When Palmer retired from the university and moved to North Carolina to be near her family, Buff inherited Palmer’s desk when she started working at an adjunct professor.

“I just felt like it was sacred. It was old and metal-y and rusty, but just beautiful because of who it belonged to,” Buff said.

“One of the things we would do is put the students in an English 101 class over the summer. We loved to have Mrs. Palmer teach the class, as she’d help them learn how to write,” Buff said.

“I had classes with her in the ‘70s. I also worked with her, and she helped me when I returned to the school,” she said. “I’ve always revered her for her patience and what she taught me.

“It’s always been precious to me to follow in her legacy,” she added.

A memorial service was held on Aug. 12 in Newton, N.C. Palmer’s obituary concluded with the following instructions: “For those unable to attend, please read a book, visit a museum or listen to classical music in memory of Sarah.”

A memorial service for Sarah Palmer will be held on Sunday, Aug. 21 at 7 p.m. at St. Andrew’s Episcopal Church in Montevallo. It will be a candlelight service with prayers, hymns and shared remembrances. “Compline is offered when the work of the day is completed, and the quietness of the evening settles over the hearts and minds of those who have come together in thankfulness for the blessings of the day which has passed and in anticipation of God’s gift of a new day,” according to the Office of Compline, Hallock and Crossier. Anyone seeking further information may contact Kathy King at 665-4927 or Sally Smith at 665-7005.