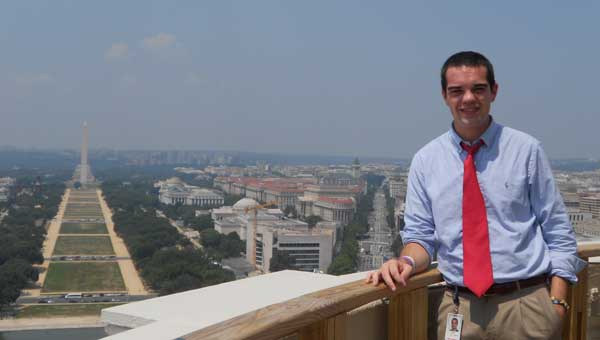 Alabaster native Jimmy Sapp spent his summer interning in Washington, D.C., during one of the capital city’s most intense debates in recent history – the debt ceiling deal.

“It was tense,” Sapp said. “It wasn’t as crazy as I thought it would be, but it was definitely stressful.”

Sapp is a rising senior at Troy University, where he is studying social sciences and is involved with the College Republicans. It was that experience and his interest in politics that encouraged him to apply for Washington internships.

He was accepted and spent the first part of his summer in U.S. Rep. Spencer Bachus’ office and the second part in U.S. Rep. Martha Roby’s office. He mostly did clerical work, but said he enjoyed the experience.

“It was a lot of fun,” he said. “I got to meet the constituents in both districts.”

Sapp lived with three people in the Washington Intern Student Housing and made a good group of friends during the internship. He had a two-break between the internship, which he used to explore the D.C. area.

While his internship took place during a tumultuous time in American politics, Sapp found the experience rewarding.

“I got a sense that no matter what you hear on the TV, there are people in Washington who do care and who are working for the people,” he said. “That’s probably the biggest thing I got out of it.

“Washington does have its issues, but it’s not as horrible as people believe.”