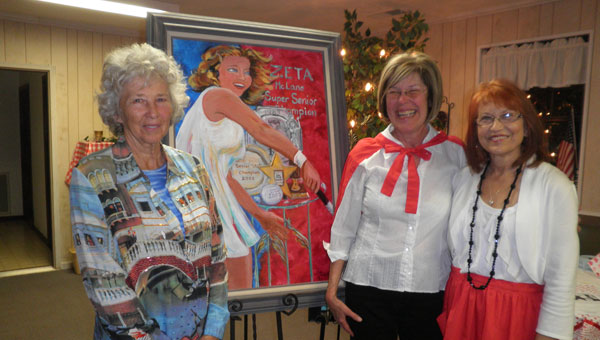 A group of closely knit women who live in Shelby Shores have supported neighbor and cancer survivor Linda Wren for more than 10 years by hosting dinners to raise money for the American Cancer Society Relay for Life South Shelby.

The friends donate, cook and serve two delicious dinners a year, either Cajun or Italian cuisines, to guests who pay a nominal fee that goes to cancer research. The dinners are held at the Shelby Shores Community Center and raised more than $2,200 this year.

This year, the River Rats added a new twist to their fundraising dinners by establishing a Healthy Living Award, whose first honoree was Zeta McLane. McLane was presented a portrait painted by Karen Jenson under the direction of master art teacher Edna Sealy, who teaches at the Shelby County Arts Council as well as the Pelham Senior Center.

McLane is in her 70s and has been playing competitive tennis for more than 30 years. She played tennis at Jefferson State when she went back to get her degree as an “older” student in 1983. McLane also plays or has played for the USTA Super Seniors, Ladies Inter Club at Homewood Park (level 5.0) and USTA Soft Court Seniors at Brook Highland (level 4.0), as well as Pelham and Greystone tennis clubs. She has won numerous trophies in singles and doubles and did not begin playing tennis till she was an adult in her 30s.

McLane also mentors and is a warm-up coach for Savannah Hammick, who is a juniors champion and won the Point Mallard Challenge Girls 16 when she was only 12!

“Miss Zeta has made such a difference in my life,” Hammick said. “She is so outgoing, so athletic, and she has taught me to never give up.”

McLane met husband George on a cruise and has been married for 35 years. They moved to Shelby Shores to retire more than 16 years ago from Arkansas. They have two children, three grandchildren and one great-grandchild.

McLane has had a life-long interest in nutrition and commitment to exercise. A homemaker with a humble and kind personality, McLane exemplifies the goals of the American Cancer Society for healthy living.

Getting old is not for sissies in my book