Jon and Dorothy Parker of Temple, Texas announce the marriage of their daughter, Caitlin of Belton, Texas, to Frank Trivett Jr., of Alabaster.

Caitlin is the granddaughter of George and Patty Alford and Bobby and Brenda Parker. She graduated from Texas A&M University and continued on to the University of Alabama at Birmingham.

Frank is the son of Frank Trivett Sr. and Cindy Terry. He is the grandson of Mary Volio-Smack and Robert Terry Sr. and Lavada Phillips and Donald Trivett Sr. He graduated from the University of Montevallo. 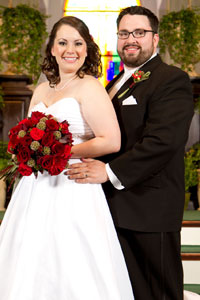 The flowers were shades of red roses wrapped in black and aqua ribbons. The bride’s wedding dress was a white ballgown with a sweetheart neckline, ruching at the waist and crystal beading along the waist that flowed into a chapel train. The cathedral veil had crystal beading along the border. Bridesmaid dresses were black satin, knee-length dresses of different styles.

The reception was held at the Pelham Civic Complex. The couple took a honeymoon cruise out of Tampa, Fla., to Belize, Cozumel, Honduras and Grand Cayman.

Tidmore-Hamrick Marlena Kathryn Tidmore and John Cory Hamrick were united in marriage on June 11, 2011 at 6 p.m. at... read more