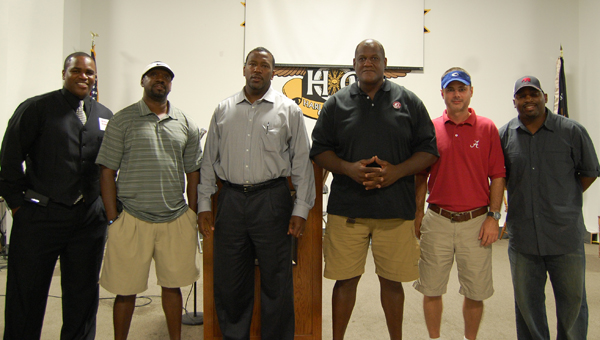 PELHAM – Andrew Zow appreciates it now, but when the former Alabama quarterback got to Tuscaloosa in 1997, the Florida native was overwhelmed by football tradition.

He wore his Alabama jersey to an elementary school to talk to students. A little girl yelled at him as he walked through a set of double doors.

Zow’s mistake: he entered through the Auburn door. A welcome mat marked the territory.

So Zow backed out the door, took a couple side steps and re-entered through the Alabama door marked by an Alabama welcome mat.

He called his mom: “These people are crazy!” he told her.

“I’m thinking to myself, ‘man, these people are naming their kids after this man,” Zow said. “I had no idea of the tradition until I got here.”

Zow was one six former Alabama players to speak and sign autographs at the alumni association’s annual event. 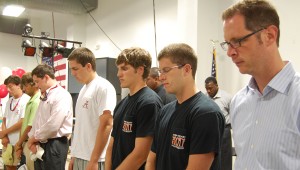 Members of Alabama's club hockey team bow their heads during a moment of silence for former teammate David Mosier, who died in his sleep Aug. 4 at age 19. (Reporter photo/Brad Gaskins)

Chris Stewart, a Crimson Tide announcer and the new co-host of The Nick Saban Show, led the on-stage discussions by interviewing each player.

The questions asked by Stewart, a University of Montevallo graduate, led to plenty of funny stories and self-deprecating humor that keep the crowd laughing most of the night.

Stewart told Michael Proctor he “can’t imagine” any kickers in Shelby County being better than Proctor was at Pelham High School.

“Am I pretty much right?” Stewart asked.

“Yes,” replied Proctor, who in 1991 kicked a 60-yard field goal that remains a state high school record. “And there’s still not.”

Prince Wimbley, a captain of Alabama’s 1992 national championship team, said he wanted to play at Alabama for its tradition. He also wanted to “make my family proud and give the fans what they wanted to see.”

He works as a dealership representative for Alabama Central Credit Union and owns a signed sports memorabilia and apparel company.

“I had back injuries, hamstring injuries and got hit the eye,” he joked. “I’m done with flag football.”

The injuries, he said, occurred in pregame warm-ups.

Thomas Rayam, most famous for blocking a Penn State field goal to secure an Alabama victory in 1989, said hardly a day goes by when he doesn’t talk Alabama football.

He works for a medical equipment company and said he sticks out when he visits offices. It’s hard for a massive 6-foot-7 man to blend in.

“It’s an Alabama story all day long,” he said.

Antonio London was a linebacker on the 1992 national championship team and played in the NFL.

Stewart asked for London’s thoughts on the transition from former coaches Bill Curry to Gene Stallings.

“It was a tough transition for me especially,” London said. “I had close relationships with some of the guys that recruited me with Curry’s staff.

“It was real interesting going from real strict rules and things of that nature to a person who all he asked of you was to give it everything you’ve got on every play.”

“As you get older,” he said, reflecting on his time at Alabama, “you really appreciate it more.”