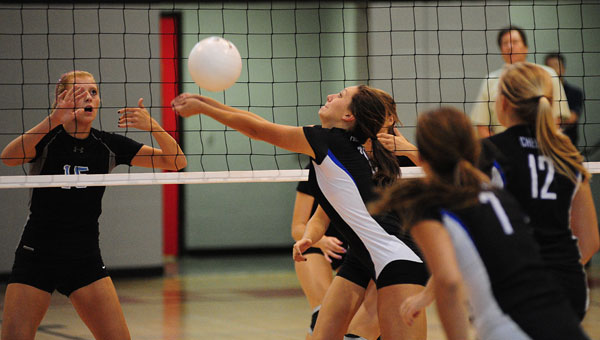 Chelsea High School volleyball coach Jamie Gill picked up a memorable victory on the first day of the season Aug. 18

Gill led the Hornets to a 9-25, 25-23, 15-11 win over Spain Park, an Alabama High School Athletic Association Class 6A team, in the opening game of the season. The victory marked the first win for the Hornets over a Class 6A team under Gill, who is entering her second season at the helm.

“It’s pretty big for us,” Gill said. “They blew us out in the first game. We just came back and rallied. Mental toughness was big.”

Chelsea capped opening night with a 17-25, 19-25 loss to Thompson in its second match of the evening.

Holly Marbut led the Hornets (1-1) with four kills in the season-opening win against Spain Park.

Colyer led Chelsea with four kills and a team-high seven digs in the loss to Thompson. Jesse Vohler recorded seven assists in the defeat.

Thompson won its first two matches of the season with first-year coach Kellyanne Turnbow at the helm.

Douglas led Thompson with 10 kills in the victory. Douglas also had four blocks in the match. Schatz added four kills.

Kasie Holcomb led the Warriors with 10 digs. Emily Cofer finished with three service aces. Acosta racked up a team-high 33 assists in the win.