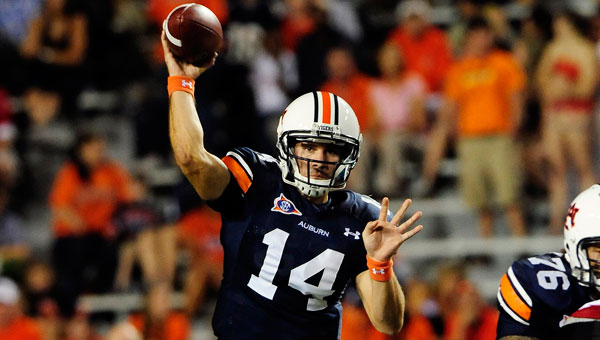 Auburn University football coach Gene Chizik announced Aug. 18 before practice that the junior quarterback will start during the Tigers’ season opener against Utah State on Sept. 3.

“I’m just glad it’s all over, glad to be named the starter, glad to just kind of have it all behind me and now really get ready for the season,” Trotter said.

Trotter has surely paid his dues, and Chizik expressed his confidence in his new go-to guy.

“I’m very proud of him for the leadership and hard work he has shown not only during camp, but also during his three years at Auburn,” Chizik said.

Trotter’s gridiron journey on the Plains has been no cakewalk.

In 2008, Trotter redshirted, then spent his sophomore season on the sidelines with a torn anterior cruciate ligament.

Last year, Trotter seemed the man for the job, but his spotlight was soon stolen by junior college transfer and soon-to-be Heisman Trophy winner, Cam Newton. Trotter did, however, clinch the backup quarterback position, appearing in six games during which he totaled 64 yards on 6-of-9 passing and rushing for 68 yards and one touchdown on five attempts.

This year, Trotter duked it out against sophomore Clint Mosely and freshman Kiehl Frazier for the number one spot.

“These decisions are extremely tough when dealing with such competitive young men who have a strong desire to excel,” Chizik said. “Clint Mosely and Kiehl Frazier worked very hard, and its been a great competition that will make our young team excel.”

Those who know Trotter best say this position is well-deserved.

“Barrett is intense, very competitive, outstanding Christian character,” said Briarwood Christian coach Fred Yancey, who coached Trotter during his five-year career with the Lions in which he racked up nearly 8,000 passing yards and 88 touchdowns.

“He loves the Lord, loves to compete, and he’s full of fire,” Yancey said. “He’s an ideal leader and competitor. It makes me proud that his coaches have been impressed with his great effort.”

While Thursday’s practice was like any other, Trotter said he could feel his new role kicking in.

“[Thursday] was just another day of practice, but it was different for me knowing I’m the starting guy,” Trotter said. “I felt a lot more responsible for things that happened out on the field when I was there.”

Trotter said now that the quarterback battle is over, he is prepared to focus on what lies ahead.

“My mindset is going to have to change from trying to win the job to now really leading this team and leading the offense especially and getting in the endzone every time we get the ball,” Trotter said.