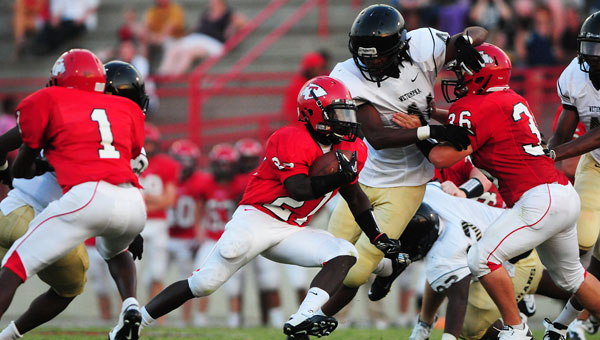 Thompson running back Dee Tolbert cuts through the defense during the Warriors' Aug. 18 jamboree against Wetumpka. (Reporter Photo/Jon Goering)

At the end of the night, the scoreboard read Wetumpka: 29, Thompson: 24. But for first-year Thompson High School head football coach Caleb Ross, the result represented a significant jump from last spring to the dawn of the 2011 season.

“In the ultimate scheme of things, a jamboree is not that big of a deal for your win-loss record,” said Ross, who came to THS after serving as an assistant coach at Prattville High School for several years.

“Wetumpka is traditionally a very strong team. I have some experience with them, because we played them every year at Prattville,” Ross said. “We’ve made a lot of improvement from that spring game.”

Despite what Ross said was a “slow start,” the Warriors erased a 13-0 deficit midway through the first quarter to take a 24-13 lead into the locker room at halftime. 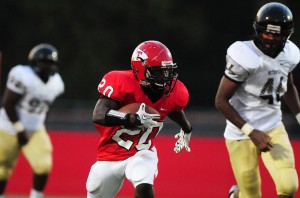 Thompson running back Demetriuse Alexander slices through the defense during the Aug. 18 scrimmage. (Reporter Photo/Jon Goering)

Matherson completed 14 of his 18 passing attempts for 188 yards during his two quarters of play, and helped rocket the Warriors to 310 yards of total offense on the night.

After allowing the Indians to build a 13-0 lead, THS lit up the scoreboard with a field goal by senior Matt Nall. Two possessions later, Thompson’s Blake Dunn intercepted a Wetumpka pass, setting up a 2-yard rushing touchdown by senior Demetriuse Alexander. 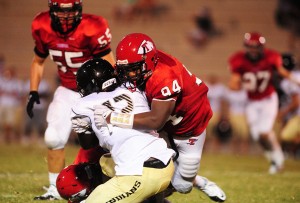 On the Warriors’ next possession, Hale broke away for an 80-yard rushing touchdown, providing all but six of Thompson’s rushing yards in the game.

Nall’s PAT gave Thompson its first lead of the game with 4:07 left in the first half.

With less than a minute left in the second quarter, senior Rasheem Mangault reeled in a 6-yard touchdown pass from Matherson. Nall again added the extra point to give the Warriors the lead at the half.

However, it was the last points Thompson scored on the night, as both teams’ junior varsity squads took the field for the second half. 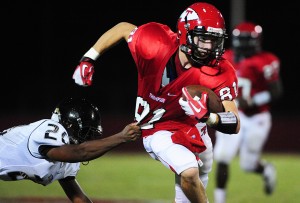 “I was a little disappointed with our JV squad for giving up two touchdowns and not putting any points on the board,” Ross said. “It’s something we’ll have to work on.”

After a scoreless third quarter, Wetumpka narrowed Thompson’s lead with a rushing touchdown and successful two-point conversion early in the fourth quarter.

Thompson held a three-point lead until the Indians punched the ball into the end zone and successfully completed another two-point conversion with a little more than 30 seconds in the game, bringing the final tally to 29-24.