Eagles down Shades Valley in jamboree 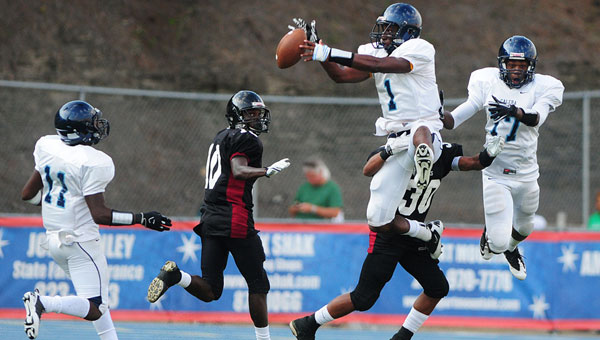 VESTAVIA HILLS — Despite a slow start, the Calera High School football team came from behind to beat the Shades Valley Mounties, 20-14, during a jamboree game Aug. 19 at Vestavia Hills High School.

The Mounties struck first just three minutes into the first half with James Rivers Jr. catching a 19-yard pass from quarterback Victor Maye Jr., but Calera responded during the final play of the half on 85-yard touchdown pass from senior quarterback Zack Renau to senior wide receiver Jeremy Hyde.

Renau passed for two more touchdowns in the second half, both to sophomore wide receiver Ronnie Clark, scoring just enough to lift the Eagles over the Mounties for the win.

“I think I played pretty well,” Renau said. “The receivers helped me out a lot.”

Renau was 10-of-13 passing, racking up a total of 267 yards and three touchdowns.
In his first game as Calera’s head coach, Wiley McKeller said he was impressed with the way his team performed.

“It’s a win,” McKeller said. “Anytime you’re going against a (Class) 6A team and you come out with a win, obviously you’re going to be pleased.”

As for next week’s season opener against Montevallo, McKeller said some adjustments do need to be made.

“We had a lot of injuries,” McKeller said. “We had seven kids out tonight. That’s probably my fault because I’ve been real rough on them in practice up to this point, but were going to get healthy this week before we play Montevallo.”