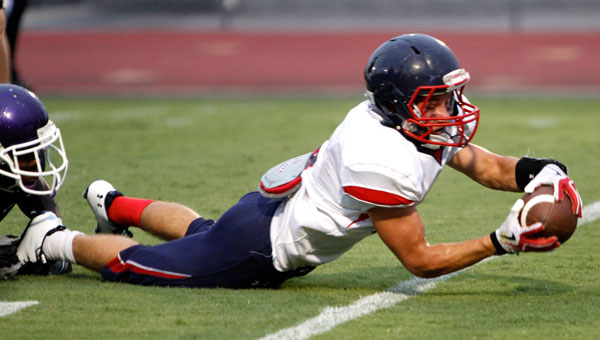 Oak Mountain High School senior running back Bradley Bostick stretches the ball over the goal line for a touchdown in a jamboree Aug. 19 against Bessemer City at Heardmont Park. (Contributed/Butch Dill)

Harris is already seeing results, even before the season officially begins.

The new-and-improved offensive line at Oak Mountain cleared a path for 186 rushing yards in the Eagles’ 12-7 win over Bessemer City High School in a preseason jamboree Aug. 19.

“I’m very proud of the way the guys have gelled,” Harris said. “We need the guys up front to pave the way. They did that tonight.”

Oak Mountain senior running back Bradley Bostick took advantage of big holes at the line of scrimmage, as he led the Eagles with 101 rushing yards and two touchdowns on 13 carries in the jamboree.

The Eagles finished with 217 total yards of offense in the opening half and racked up 12 first downs in the two varsity quarters in the jamboree.

Despite the positives he saw in the rushing game, Harris said the Eagles still have plenty of work to do to become a competitive team in the best region in the state in Alabama High School Athletic Association Class 6A, Region 6.

“There were a lot of good things,” Harris said. “It’s very rewarding to win, but we’ve got a lot to clean up.”

The Eagles didn’t waste any time in taking the upper hand against Bessemer City.

Bostick capped an 11-play, 64-yard drive with an 11-yard touchdown run on the Eagles’ opening possession. Bostick rushed for 28 yards on the opening drive and helped Oak Mountain move the chains five times before his touchdown run.

The Eagles took a 6-0 lead with 7:42 remaining in the first quarter after Mitch Mathias had his extra-point attempt blocked following the touchdown.

Following a three-and-out by Bessemer City on its first possession, the Eagles needed only one offensive play to add to their lead with Bostick scampering to the end zone for a 42-yard touchdown run with 5:29 left to play in the opening quarter. A two-point conversion attempt failed when Bessemer City broke up a pass attempt by Mickey Forrest, which left the Eagles clinging to a 12-0 lead.

Bessemer City responded immediately with a 95-yard kickoff return for a touchdown, but it was the only time the Tigers reached the end zone in the jamboree.

After the first two quarters of varsity action, the Oak Mountain junior varsity and freshmen teams blanked Bessemer City in the second half. The Eagles’ freshmen ended the scrimmage with a goal-line stand in the final minute.

Forrest and Jake Adams shared duties at quarterback in the varsity portion of the scrimmage. The duo completed 5-of-10 passes for 31 yards in the opening half. Forrest had one pass picked off.

Scott Hester led the Eagles with 14 receiving yards on two catches. Chris Jones led the Oak Mountain defense with three tackles and a sack. Barrett Gossett finished with one interception.