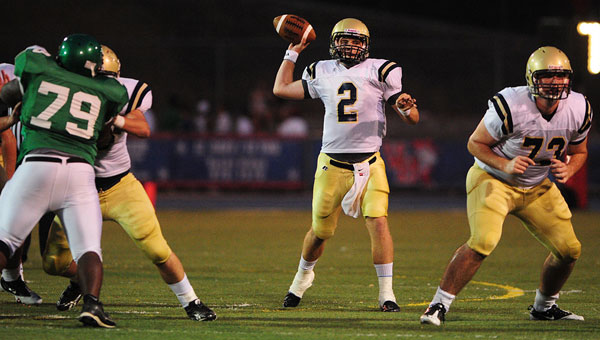 “We took it as a night to go to work,” said Briarwood head coach Fred Yancey. “We weren’t worried about the scores or records, it was all about work, and the kids did work.”

The Lions scored on their first drove off of a 5-yard pass from senior quarterback Ben Craft to senior wide receiver Cole Pearson. The Cavaliers quickly answered when Trevor Brooks caught a 65-yard touchdown pass from quarterback Johnny Boohaker.

From then on, it seemed like John Carroll was stuck in the Lion’s den.

Senior halfback Matthew Furuto responded with a 50-yard run to the Cavaliers’ 15-yard line, which was soon capped off by a 13-yard touchdown run by junior Keaton Russell, giving the Lions the lead.

Briarwood capped off the first half with a 33-yard pass from Craft to Furuto.

Senior quarterback Jon Stapleton took over for the Lions during the second half, passing for two touchdowns to help finish off the Cavaliers.

“I think we’re prepared,” Craft said. “Coach Yancey keeps preaching to us right now that we’re a good team, we’re not a great team yet. If we keep putting things together like we did tonight and executing our coaches plan for us, I bet we’re going to have a real good year and real special year.”

Eagles down Shades Valley in jamboree