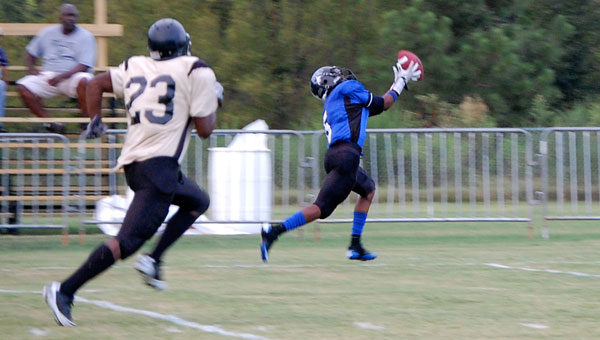 The game got off to a quick start as the Lions only had to run three plays from scrimmage to get on the scoreboard following a 68-yard touchdown pass from sophomore quarterback Gavin Sumrall to Montez Hayes to take an early lead.

Not long after on Ellwood’s first play from scrimmage, Kingwood
forced a fumble to take over on the 27-yard line. Three plays later, after a few penalties, Sumrall connected with Hayes again for a 31-yard touchdown to go up 14-0 early in the first quarter.

Kingwood also scored on its next drive with another Sumrall pass, this time a 9-yard toss to senior Charles Robinson. After being forced to punt for the first time in the game, the Lion defense had to step up.

Five plays in to the Eagles’ drive, Junior Dalton Sparks intercepted a pass and returned it 15-yards for another Lion touchdown. The first half was a dominating performance on both sides of the ball for the Kingwood Lions.

The defense held the Eagles to negative-35 total yards in the first half and went
in to the locker room up 33-0.

After halftime, the Ellwood Eagles came out ready to fight back. The opening
kickoff was returned 85 yards for a touchdown by Deriaun Glenn to get the Eagles’ first points of the game.

Kingwood answered back with a 63-yard scoring drive on its first possession
of the second half.

Ellwood wasn’t ready to give up yet. Running back Deriaun Green scored from 21-yards out to get six more points on the board.

Fatigue began to set in for the Lions. After being forced to punt on the rest of their drives in the game, the Lion defense closed out the game with their second safety to take a 29-point lead.

After fielding the kickoff, Kingwood went in to the victory formation to take its first win of the 2011 season.

“It was a sloppy win, and we’ve got a lot of things to work on, on both
sides of the ball,” said Kingwood coach Bob Spurgeon after the game.

“I thought we were a little bit better fundamentally, and we just need to work out a few kinks and get back to the basics on Monday.”

The Kingwood Lions finished the game with 256 total yards of offense and head on the road next week to take on Prattville Christian Academy.