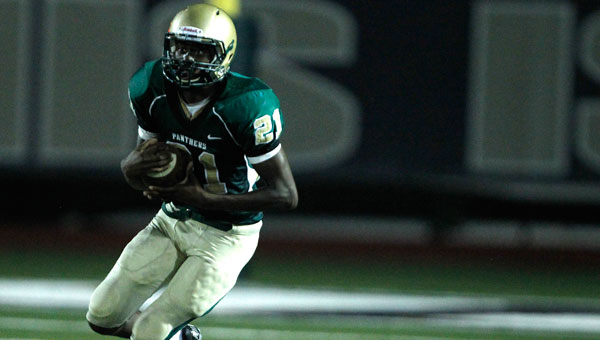 For senior quarterback Gray Cato, that meant one thing in summer practice:

After Pelham beat Tuscaloosa County 34-12 in a jamboree game Friday night, Cato said the repetitions were worth it.

Pelham never threw a pass and pulled its starters with a 34-6 lead late in the third quarter. The starting offense rushed for 227 yards.

“It’s different than anything I’ve ever been a part of,” said Cato, who rushed for 70 yards on 11 carries. “With the skill set we have, we all fit it really well.”

“I love it,” the junior running back said of the triple option. “I get the ball a lot.”

And when he did, he said his linemen cleared the way.

“The line did amazing,” said Nichols, who scored on runs of 24, 30 and 4 yards. “I was able to boost my performance off them. They opened up holes and got me where I wanted to go.”

In the spring, Nichols said Pelham worked on the option for two months before putting on pads.

“We went through it every single day in practice,” Nichols said. “Getting hit by the same team gets a little annoying. They (Pelham’s defense) know what we’re doing every time in practice. It was unstoppable tonight.”

Nichols said Cato made “great choices” with the football.

Fletcher Johnson, a junior running back, scored on a 4-yard run and had 26 yards on four carries.

J.T. Ross, a senior defensive back, scored on a 67-yard interception return.

Asked to grade his offense Friday night, Cato gave it a ‘B.’

Pelham coach Brett Burnett said he’d have to watch the film before giving a grade.

Burnett said the new offense gives his team the best chance to win, but it’s still a “work in progress.”

“We’re hoping that we can control the clock, control the tempo of the game and play at our pace,” Burnett said. “The kids are beginning to believe in it.”

Pelham opens the season next week against Hueytown.

“There’s a lot of improvement to be made between now and Friday night,” Burnett said.

“Mentally,” Cato said of the jamboree, “this was our opening game of the year.”

By WESLEY HALLMAN / Sports Editor The Hope Christian School football team enjoyed a memorable season in 2010 on its... read more