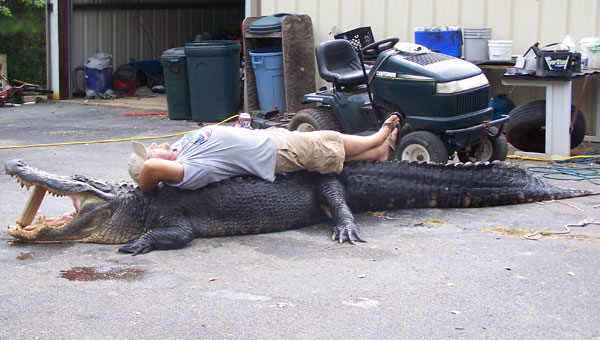 Keith Fancher of Chelsea rests on top of an Alabama state record 838-pound alligator that he helped nab during a hunting trip to south Alabama. (Contributed)

J.C. Peeples of Columbiana never thought he and his wife, Stacy, would be part of a group bringing home an alligator jackpot when his cousin Keith Fancher of Chelsea won a lottery to go gator hunting in south Alabama and invited the couple along for the trip.

Hours after the group launched a boat at Rolling Cooper State Park in Wilcox County, the Peeples, in a group of seven friends and family members, slowly made their way back up the Alabama River in the  middle of the night with an Alabama state record 14-foot, 2-inch gator, which tipped the scale at 838 pounds.

Peeples said the gator was nearly a foot longer than the previous state record.

“It was all we could do” to reel in the gator, Peeples said.

Peeples said the group, which included the Peeples along with Fancher, David Hatchett, Mindy Hatchett, Mike Bailey and Destin Bailey, first spotted the gator at 9:33 p.m. Aug. 20 approximately three miles from their launch spot on the Alabama River. The group was able to get their first hook in him at that time, but another hour passed before they were able to contain him and put another hook in him.

In the end, it took three saltwater rods, each with 150-pound test line, and 10 treble hooks to wrap the gator up tight enough to securely dispatch him in accordance with state law.

Peeples said it took a single shot with a 20-gauge shotgun and No. 6 birdshot to dispatch the gator.

“A beast that big you cannot get a hold on,” Peeples said.

Peeples said the alligator is estimated to be between 70-90 years old. Peeples said he hopes to find someone who wants to mount and display the gator to the public.

“This gator would have a lot of stories to tell,” Peeples said, “if it could talk.”