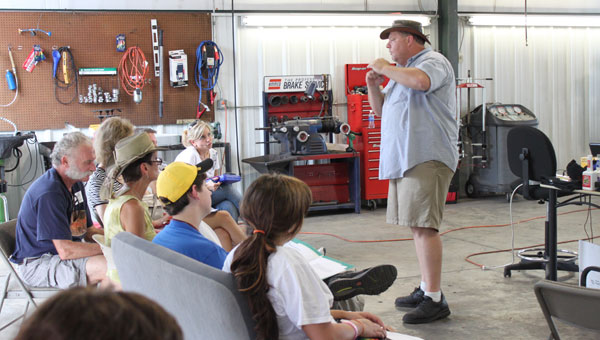 Jim Moore explains the workings of an internal combustion engine to the Road Scholars class on Aug. 20. (Reporter photo/Christine Boatwright)

MONTEVALLO – After seeing one too many drivers with broken down cars, brothers Jim and Obie Moore decided they could help teach young drivers how to better manage their cars.

The Moores own Moore Brothers Automotive, located at 3919 Alabama 25 in Montevallo. The brothers designed a program called “Road Scholars” and set out to teach drivers, especially young drivers, how their cars work, how to maintain their cars and how to handle automotive emergencies.

Around 20 locals arrived at the automotive shop to take the class on Aug. 20.

“I’ve watched my dad change tires and oil, but if I were to do it myself, I’d fail,” Hoover resident Brooke West said.

Andriah Johnson of Wilton, who recently earned her driver’s permit, said she decided to take the class to learn more about the car she would be driving.

“I don’t want to break down somewhere there’s no signal,” she said.

Bert Peete brought his 15-year-old daughter, Lyric, to the Road Scholars class in order for her to learn how to jump-start a car and learn the basics.

Jim Moore began the class with a presentation on the basics of an internal combustion engine, explaining how the parts work together and how to maintain the engine efficiently.

“One square inch of compressed gasoline has the same power as a quarter stick of dynamite,” Jim said, “so don’t use it in your grill. Gasoline goes in your car. It never goes on your campfire. Capeesh?”

One of the class members asked how often drivers should have their oil changed.

Obie Moore said he and his brother hope to make the Road Scholars class a quarterly or monthly offering, but they are limited by the support they receive from their vendors. For information on future Road Scholars classes, call Moore Brothers Automotive at 665-1099.

What to do if:

-Car breaks down in an intersection: First, get out of the car, and then call 911 to alert local police of road blockage.

-Battery light turns on: Turn off air, radio and other unnecessary components, look for an alternate, uncrowded route and drive to an automotive business as soon as possible.