“Originally, I’m from Athens, Alabama, but I’m coming from Spanish Fort from a teaching job there,” Moore said.

Moore, a University of Alabama alum, said he moved to Shelby County after seeing an open position at Oak Mountain, applying and getting the job. 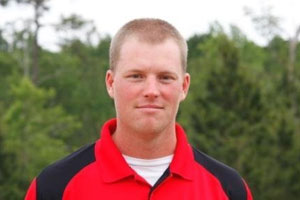 “I teach junior and senior English, so I actually have things to do during the day, not just teaching PE or something like that. It’s not terrible by any means — we have really good things at Oak Mountain,” he said.

In addition to continuing his career as a high school English teacher, Moore will continue his six-year stint as a coach.

“I’m the head varsity women’s basketball coach. I coached football, basketball and baseball. (It comes from) being young and trying to get your foot in the door and stay in the door,” Moore said. “I was just willing to help. Our football staff (at Spanish Fort) was real close, and just helped everybody out with the other stuff.”

“I’m excited to get started. I took over for Coach Clayton, as he’s a principal at the school now,” he said. “He did a really good job with the program. I’m kind of putting my mark on things. I’m chomping at the bit to get going, but we don’t start until October.”

Moore is currently working on his doctorate degree through an online program with the United States Sports Academy in Daphne. He said after coaching three sports during the past five years, he has some time off, and he’d “rather keep busy with something like that.”

Moore’s sister lives in the Birmingham area, so he didn’t move into a completely unfamiliar area.

“I think it’s great. I do miss the beach being down south, but this is a great area to raise a family and have nice restaurants and things to do,” he said. “This is a booming area and a great city to live in.”

FROM STAFF REPORTS CHELSEA – One person was killed and another injured in a two-car accident Aug. 21 on U.S.... read more