A mission to Renton, Washington 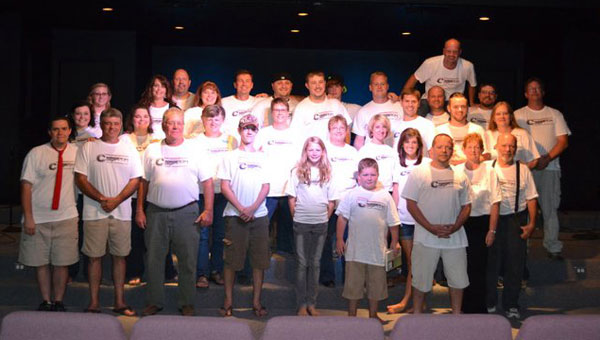 These Chelsea Community Church members spent a week in Renton, Wash., on a mission trip. (Contributed)

“I left here, set to transform a building, and came back, myself transformed,” said Joe Maxwell, one of 32 Chelsea Community Church members who spent a week “on mission” in Renton, Wash.

Maxwell’s wife, Kristy, said the week had also been “an amazing, life-changing experience” for her. “God’s presence was so strong that the impossible happened,” she said.

He excitedly recounted the Chelsea group’s activities at the Renton church, which was having so many problems that leaders were afraid they would have to close the doors.

The mission team repainted the church’s entire outside structure and completely overhauled the grounds, Davis said.

They installed a new entry door and added a modern awning to mark the main entrance. Inside, they rebuilt and painted the children’s church area and repainted the worship center where they installed stage lighting and sound, computer system and LCD screens.

They built a welcome center in the lobby area, repainted the main lobby area, and built, painted and tiled a new café. Besides all this, around 70 percent of the building was rewired or wiring was repaired.

“Anyone of those tasks should take a week by themselves,” Davis said, “but God enabled us to complete them all in less than a week. And that’s not even the best part,” he added. “At night, Wednesday through Friday, we were running training services as well as a kids service.

“And get this: we had six people give their lives to Christ.”

Another incredible thing occurred after they ran out of money in the “make-over” fund and needed to buy more supplies.

The pastors decided — reluctantly — to take up an offering, and in the collection plate was a check for $5,000.

On Friday night, people from the Renton church ld an exciting public-invited “launch” service, putting into practice things the Chelsea group had trained them to do.

And the excitement didn’t end when the Chelsea team returned home on Saturday. Exhausted, but still excited, they shared their experiences in their Sunday morning service.

And at the church in Renton, Wash. where around 60 people had been attending Sunday services, 114 were in attendance, and two people accepted Christ.

“With men it is impossible, but not with God,” said Kristy Maxwell, quoting from Mark 10:27 (NKJV), “for with God all things are possible.”

By SHELBA NIVENS / Community Columnist The Lupus Foundation of America (LFA) estimates that 1.5 million Americans have a form... read more