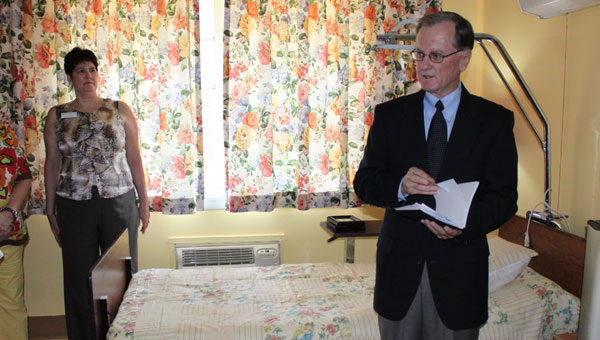 Hospice Advantage Chaplain Henry Hobson speaks a blessing and a prayer in one of the new family rooms as Alicia Rogers looks on. (Reporter photo/Christine Boatwright)

ALABASTER – Hospice Advantage and Chandler Health and Rehab joined in a “labor of love” to give family members with terminally ill relatives a place to spend the night, said Alicia Rogers, administrator of Hospice Advantage.

Chandler Health and Rehab donated two rooms to make over for the project, and have two more rooms in the process of being redone.

“We furnished the two empty rooms and make them home-like,” Rogers said during a celebration and blessing time on Aug. 24. “We have a couch that pulls out into a bed. The bed is already made, and there’s a television and microwave.”

Hospice Advantage and Chandler Health and Rehab collaborated to decorate the two rooms with newly painted walls and furnishings to give the rooms a comfortable feel.

The rooms are available for any terminally ill patient from the community, said Vicki Murphy, the administrator of Chandler Health and Rehab.

“The rooms are not just for our patients,” Rogers said. “We gave the rooms to Chandler. I’ll request the room if the family wants to come.

“We have had patients in the nursing home, and we don’t want to just come here, see the patients and leave,” Rogers added. “There’s a difference between seeing hospice patients at home or in a nursing home.”

Murphy said the rooms were created to give respite and hospice patients a home-like environment at a “time when they need it most.”

“A lot of people that come here are from the community,” Murphy said. “It’s a relief for the family, as we have (nurses) for care giving and a chaplain on staff.

“We have a specialty unit for complex medical patients, but we wanted something special for the patients who are dying. It’s a community service,” she added.