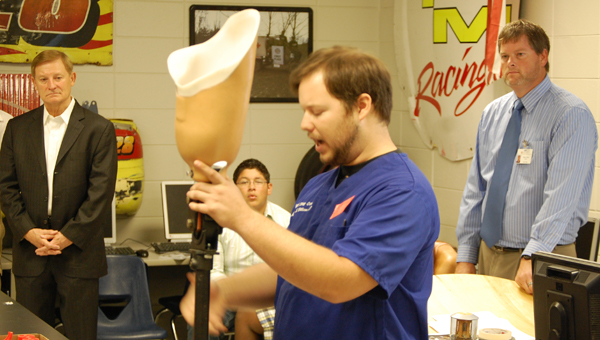 CALERA – Congressman Spencer Bachus, R-Alabama, visited Calera High School on Thursday morning for an update on a class project to build prosthetic limbs out of old car parts for amputees in third-world counties.

Students in Brian Copes’ engineering applications class made an artificial leg during the last school year, using motor mounts for ankle and knee joints. It cost about $150 in parts to build the artificial limb.

A typical prosthetic leg for an above the knee amputee retails in America for about $60,000.

“It puts to rest the fallacy that American students can’t do it,” Bachus said. “These students are really functioning on an engineering level that college graduates don’t often function on. To come up with a $150 prosthetic leg that markets for $60,000 just shows American innovation.”

Copes’ students should “be an inspiration to all of us that our future is bright,” Bachus added.

The project began in February 2011 with help from Adam Williams, owner of Next Step Prosthetics in Alabaster.

“Manufactures spend millions of dollars designing and implementing new products,” Williams said. “The students were able to very quickly come up with something that moves like a normal leg. That’s difficult to do.”

Williams, who makes mission trips to Honduras to provide artificial limbs for amputees, took one of the student-built prosthetics on a recent trip “to prove to ourselves that it is possible.”

“There is somebody in Honduras walking on this thing,” Williams said, adding that the prosthetics are made from parts that can be purchased at local hardware stores.

Copes’ students made the prosthetics for a “universal setting, and today that doesn’t exist,” Williams said.

Copes challenged students in this year’s class to improve on the work began during the last school year.

The prosthetics are “capable of competing with modern day prosthetics, especially as we pursue lighter weight material and better technology,” Williams said.

“It’s remarkable that we’ve been able to come up with this,” Pearce said. “I feel good being able to help people out that I don’t even know in third world countries that are less fortunate than me.”

Bachus said Copes’ students “have the skills and have received the training here to get not only well-paying jobs, but to change the world for the better.”