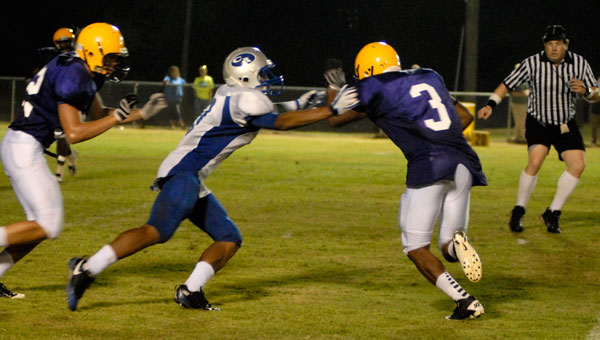 Young, who triples as the team’s punter and a defensive back, threw for three touchdowns to top the Rebels, 38-19. But he’s not getting complacent.

“I still need a lot of work,” Young said. “We made a lot more mistakes than we needed to, but we came out with a win in the end.”

The Chargers (1-0) fell behind during the first drive after a quarterback keeper resulted in a touchdown just two minutes into the first quarter.

After both teams rallied back and forth, the Chargers finally answered with an 8-yard touchdown by junior running back Dalton Lodge.

With 4:23 left in the first half, senior defensive end Austin Davis tackled a Rebel running back in the endzone for a safety, lifting the Rebels up 8-6.

The Rebels responded with a 7-yard touchdown run during the next drive, but Cornerstone Christian answered immediately as junior running back B.J. Smith reached the endzone with just 50 seconds left in the third quarter.

With 3:07 left in the game, the Chargers capped off a fumble recovery with a touchdown run from junior running back Ronezz Stevens.

The Rebels scored a touchdown on the last play of the game, but it was too little too late.

Although the Chargers looked strong during their premiere, head coach Tim Smith insists there are still many improvements to be made before the team travels to Autauga Academy on Sept. 2 for its second game of the season.

“We’ve got to get a lot better real fast,” Smith said. “We know that we made a lot of mistakes. The main thing that I’m disappointed with is the way we tackle. We didn’t tackle well.”

While improvements need to be made on defense, Smith said he was pleasantly surprised with how the offense handled the ball.

“I thought we threw the ball better than we ever could,” he said.