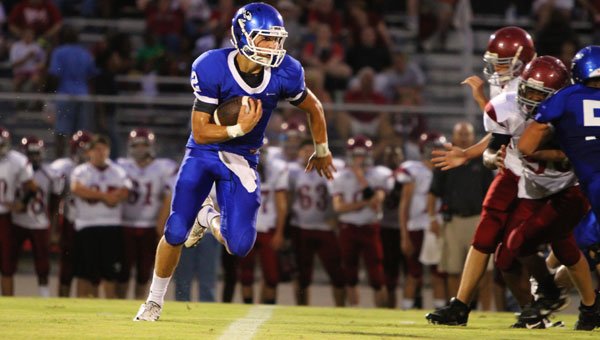 Chelsea High School senior quarterback Jake Ganus looks for an opening in the Brookwood defense in the Hornets' 34-7 win in their season opener Aug. 25. (Contributed/Cari Dean)

CHELSEA — Chelsea High School senior linebacker Russ Birdsong wanted to make sure no one made an inaccurate assumption following the Hornets’ preseason jamboree against Lincoln.

Birdsong and his teammates were hungry to get back out on the field and prove any doubters wrong.

One week after a less-than-stellar performance, Chelsea responded with a 34-7 win over Brookwood in its first regular season game of the 2011 season Aug. 25.

Birdsong led a defensive unit that kept the Brookwood offense off the scoreboard and limited the Panthers to only 45 yards of total offense in the first half. Brookwood scored its lone touchdown in the game on an interception return.

“We came out with a chip on our shoulder,” Birdsong said.

Senior quarterback Jake Ganus led the Hornets (1-0) with 166 rushing yards and three touchdowns on 17 carries in the victory. Ganus also completed 10-of-14 passes for 87 yards and a touchdown.

Junior running back Julius McCall rushed for 121 yards and a touchdown on 21 carries.

Despite the offensive production in the opening half, Chelsea coach Wade Waldrop wasn’t pleased with the Hornets’ execution in the second half.

“I feel like we’re not a very good football team,” Waldrop said. “We’re not very consistent. We expect a lot out of this group. We’ve got to play a full four quarters.”

McCall put the Hornets on the scoreboard with 7:17 remaining in the first quarter with his 4-yard touchdown run, which capped a 12-play, 68-yard opening drive. Sophomore kicker Taylor Martindale added the extra point to give Chelsea an early 7-0 lead.

Ganus scored his first touchdown in the game on a 2-yard keeper with 4:10 left in the opening quarter. Martindale’s extra point put the Hornets ahead 14-0.

Ganus darted into the end zone from 12 yards out, which capped an eight-play, 91-yard drive early in the second quarter, to give Chelsea a 21-0 lead following Martindale’s third extra point.

Following the Hornets’ first three-and-out in the game, sophomore running back Aki Coles reeled in a 5-yard touchdown pass from Ganus with 16 seconds remaining in the opening half. Martindale’s extra point gave Chelsea 28-0 lead at the break.

The Chelsea offense stalled in the second half, with Ganus’ 3-yard touchdown run midway through the fourth quarter accounting for the Hornets’ only score in the final 24 minutes.

While the offense struggled, the Chelsea defense continued to keep the Brookwood offense out of the end zone in the second half.

Birdsong led the Hornets with 12 tackles. Junior defensive back Davis Shoemaker finished with a fumble recovery and an interception in the win.

FROM STAFF REPORTS The University of Montevallo women’s soccer team was voted to finish seventh in the Peach Belt Conference... read more