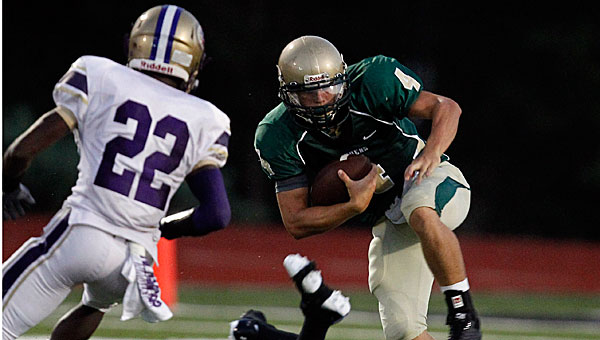 Pelham's quarterback Gray Cato scrambles for a first down against Hueytown during a football game at Ned Bearden Stadium Aug. 26. (Reporter Photo/Butch Dill)

Several key mistakes prevented the Pelham Panthers from posting a win during their 2011 season opener against the Hueytown Golden Gophers.

The Panthers earned nine first downs in the 34-6 loss.

“We’ve got to handle ourselves better. We had too many mistakes to win this game,” said PHS head coach Brett Burnett. “We didn’t get out early like we should have.

The Panthers gained 195 total yards in the loss.

But a diving catch by PHS junior wide receiver Kenny Meadows and a 20-yard scamper by Cato during the next series helped set up a 14-yard scoring run by the senior quarterback, cutting the Golden Gophers’ lead to 27-6.

A botched snap prevented Pelham from connecting on the point-after-touchdown.

After Hueytown recovered an on-side kick on the ensuing kickoff, the Golden Gophers scored again on a 47-yard run, bringing the game to 34-6.

On its final drive of the game, Pelham drove to the Hueytown 13-yard line, but a snap over Cato’s head backed Pelham up 27 yards to the 40-yard line with a little more than 20 seconds left in the game.

A pair of incomplete passes to senior wide receiver Sam Mburu gave Hueytown the ball with only a few seconds remaining in the contest.

FROM STAFF REPORTS The University of Montevallo volleyball team was voted to finish third in the Peach Belt Conference standings,... read more