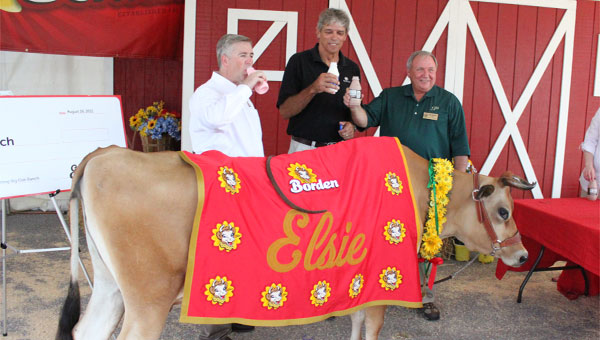 PELHAM – Pelham Mayor Don Murphy presented the key to the city of Pelham to Elsie the Borden Dairy Company Cow to kick off the 2011 Alabama State Fair on Aug. 26.

In presenting the key, Murphy welcomed Borden Dairy Company to be a part of the fair. Borden will sell $2 pints of strawberry, chocolate and white milk during the fair. Dennis Roberts, Borden’s general sales manager, announced that half of the proceeds from the pints of milk will be donated to Big Oak Ranch.

“We’re excited to introduce the Borden brand and meet our new neighbors,” Roberts said. “Borden stands for quality, freshness and healthiness of product.”

“We’ve never gotten a check from a cow before,” Croyle said with a laugh. “We currently have 126 children with 23 going to college this year. Thank you for choosing us.”

Murphy welcomed Elsie to the Alabama State Fair as he hung a large golden key around her neck.

“Elsie is a hallmark of American culture, and now she’s part of Pelham history,” Murphy said.

“I’m going to use this picture in my campaign,” he added as he posed with Elsie. “I grew up on a dairy farm, so I’m used to them. This is a fine girl here.”

When asked about the Alabama State Fair, Murphy said it’s a great thing for the citizens of Pelham.

“It brings in revenue for the city,” he said, “and it gets better and better every year. I’m happy to welcome it back to Pelham. People come and have a great time. Be sure to buy good, cold milk.”

FROM STAFF REPORTS The University of Montevallo volleyball team was voted to finish third in the Peach Belt Conference standings,... read more