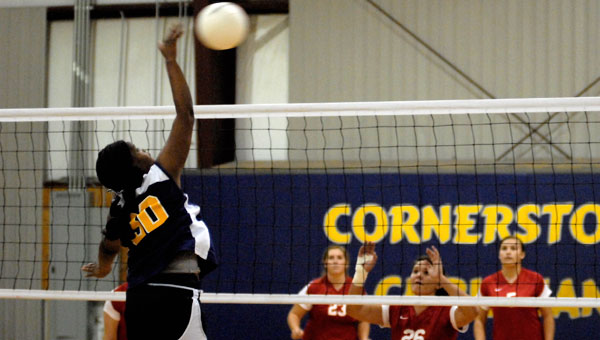 The Cornerstone Christian School Chargers showed rival Coosa Valley Academy no mercy as the Rebels took the court on Aug. 25 for the first volleyball game of their inaugural season.

The Chargers swept the Rebels, improving their record to 3-2.

Serving was a key factor, as Cornerstone Christian racked up a total of 43 aces. Eighth-grader Laura Beth Franklin led the team with 16, freshman Lindsey Sims followed with 14, and sophomore Tamera Kirksey rounded out the leaders with 12 aces. Kirksey also had three kills.

The Chargers scored 25 unanswered points to take the first game, but Coosa Valley stepped up during the second game, scoring 13 points before Cornerstone Christian clinched the victory.

Coosa Valley struck first during the third game, quickly going up by two. As the teams rallied, the Rebels began gaining momentum.

But in the end, experience was the deciding factor as the Chargers took their third straight game to win the match.

“This is our first season, our first match and I’m proud of our girls,” said Rebels’ head coach Jean Ann Sprayberry.

The Rebels have a young team, and before practices began this season, none of the players had set foot on a volleyball court.

“I think we did pretty good for our first game,” said Amelia Ripley, captain and lone senior on the Rebels’ squad.

While Chargers players said they were happy about the win, they know there is room for improvement.

“I think I could have been personally been better,” said senior setter Jaclyn Largin, who had three assists. “I think our team has come far since the beginning of the year. We’re not just a team, we’re more of a family. We bicker at each other, but we learn from our mistakes and carry on the game and get better as we go.”

Chargers’ head coach Cyndi Sims said she has high hopes for her team as the season continues.

“We have a lot of young girls on our varsity team, so we’re a growing team,” she said. “I think that we will do very well this season.”