Eagles down rival Bulldogs in opener 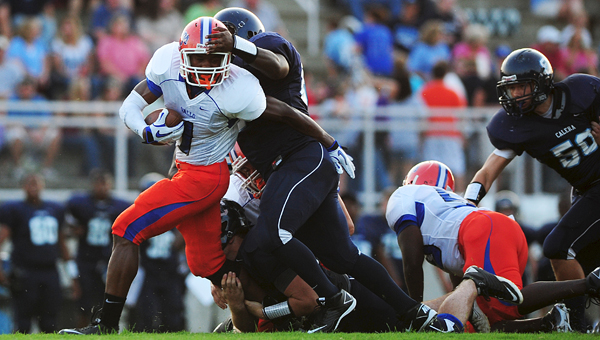 Reneau, who had several starts behind center a year ago when starter Brandon Wells was injured, came out firing on all cylinders in his first game as the undisputed team leader.

Reneau passed for 226 yards and three touchdowns in the Eagles’ 61-14 win over rival Montevallo in their season opener Aug. 26 at Ricky Cairns Stadium.

“We came out and made a big statement,” Reneau said. “We came out here and did what we were supposed to do tonight.”

Reneau completed 19-of-28 passes for 226 yards with three touchdowns in the win. Reneau also rushed for 75 yards on four carries.

Sam Adams led the Eagles with 68 receiving yards and two touchdown receptions on six catches in his first game in a Calera uniform. Adams also rushed for 31 yards on six carries.

Shakeith Tyes, who didn’t see any action in the opening half, rushed for 73 yards and a touchdown on 11 carries. Brian Stone scored on a 65-yard touchdown run in his lone rushing attempt in the game.

Senior running back Garrius Chappell led Montevallo with 122 rushing yards and one touchdown on 22 carries.

Eugene Rodgers rushed for 118 yards and a touchdown on 18 carries.

Calera scored on four of its first five offensive possessions in the opening half.

Following a three-and-out by Montevallo, Danley reeled in a 3-yard touchdown pass from Reneau with 7:38 remaining in the first quarter to give Calera an early 7-0 lead following Stephen Ellison’s extra point.

Reneau found Adams open in the end zone for a 5-yard touchdown with 8:35 left in the second quarter and Ellison added the extra point to give the Eagles a 14-0 lead.

Adams reeled in a 37-yard touchdown from Reneau with 3:47 left in the first half to give the Eagles a 21-0 advantage following Ellison’s extra point.

The Eagles carried a 28-0 lead into the locker room at halftime following a 1-yard touchdown run by Sheldon Nixon and another extra point by Ellison with 20 seconds left in the second quarter.

Ronnie Clark returned the opening kickoff 95 yards for a touchdown in the second half to push the Eagles’ lead to 34-0 early in the second half. Calera went ahead 40-0 following an 18-yard touchdown run by Josh Wood with 1:59 remaining in the third quarter.

Adams returned a fumble 5 yards for a touchdown and Jordan Bishop rushed in for a two-point conversion to give Calera its largest lead of the game at 48-0 with 33 seconds left in the third quarter.

Montevallo finally got on the scoreboard with 10:22 left in the game following a 37-yard touchdown run by Chappell. Brett Gray’s extra point made the score 48-7.

Tyes answered with a 2-yard touchdown run for the Eagles with 6:28 left in the game. Ellison’s extra point pushed the lead to 55-7.

Rodgers rushed for a 54-yard touchdown with 4:46 left in the game and  to cut the lead to 55-14 following Gray’s second extra point.

Stone capped the scoring in the game with his 65-yard touchdown run with 3:55 left in the game.

Montevallo coach Jamie Williams said losing two offensive linemen to injuries in a jamboree last week hurt the Bulldogs, but he didn’t want to make any excuses for the disappointing loss.

“We’re not going to cry over spilled milk,” Williams said.

Beating the rival Bulldogs by a 46-point margin was certainly a big statement, but first-year Calera coach Wiley McKeller put the win in perspective moments after the final seconds on the clock ran out in the season opener.

“Our goal is not to beat Montevallo,” McKeller said. “Our goal is to make it to the state playoffs.”

The Eagles’ push toward a playoff run begins Sept. 2 with their Alabama High School Athletic Association Class 4A, Area 3 opener against Beauregard.

Montevallo will play host to Greensboro in its AHSAA Class 3A, Region 4 opener Sept. 2.