Jaguars move on to Bucs after win 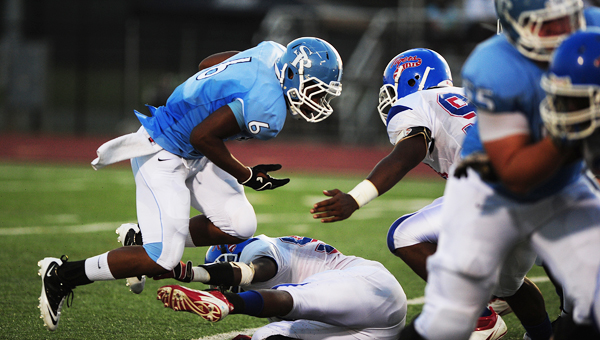 HOOVER — Spain Park High School’s annual meeting with Hoover on the gridiron each fall has been incorrectly labeled the past few years.

“It’s probably not a big rivalry until we win,” Lindsey said. “We’re trying to do that next week.”

Spain Park faces rival Hoover in its second game of the season Sept. 2.

The Jaguars escaped with a victory in their warmup one week ahead of the biggest game in the regular season. Spain Park senior defensive back Devon Brown intercepted a pass in the end zone with 13 seconds remaining in the game to lift Spain Park to its season-opening win.

The Spain Park defense kept Noxubee County off the scoreboard in the second half after trailing 20-14 at halftime.

“We just stayed focused in the second half,” Brown said.

For the second week in a row, the Jaguars looked inconsistent on offense. Spain Park recorded several big plays in the win, but three fresh faces on the offensive line and missed blocking assignments in the backfield led to four sacks and a sprained ankle for junior quarterback Nick Mullens. 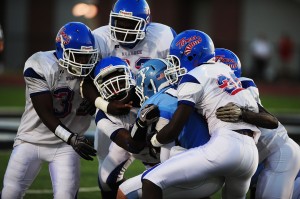 Spain Park's Reid Reinagel is wrestled to the ground by a group of Tiger defenders during Saturday's game. (Reporter Photo/Jon Goering)

Mullens, who said he’ll back to full health for the Hoover game, completed 14-of-31 passes for 221 yards and three touchdowns in the win. Hunter Kahn, Drake Grisham and Cade Hoffman caught a touchdown pass each.

Spain Park put the first points on the scoreboard when Kahn reeled in a 15-yard touchdown pass from Mullens to cap a 7-play, 59-yard opening possession by the Jaguars. Jake Hoffman added the extra point with 8:13 left in the first quarter to give Spain Park an early 7-0 lead.

Noxubee County tied the game with a 38-yard touchdown run by Ladarrell Hunt with 1:52 remaining in the opening quarter.

The Jaguars needed only one play to regain the lead. Grisham reeled in a 61-yard touchdown pass from Mullens 20 seconds later to give the Jaguars a 14-7 lead following Hoffman’s extra point.

Deangelo Ballard of Noxubee County tied the game with his 1-yard quarterback keeper with 5:06 remaining in the first half.

Noxubee County took its first lead of the game following another 1-yard touchdown run by Ballard with 30 seconds remaining in the first half. Spain Park trailed 20-14 at halftime after Noxubee County’s two-point conversion attempt failed.

Spain Park took the lead for good following a 71-yard touchdown pass from Mullens to Hoffman with 7:19 remaining in the third quarter. Hoffman’s third extra point gave the Jaguars a 21-20 lead.

Hoffman capped the scoring for the Jaguars with his 43-yard field goal with 4:31 left in the third quarter, which gave Spain Park a 24-20 advantage.

Noxubee County reached the red zone twice late in the game, but both possessions ended with an interception. Spain Park junior linebacker Jeniah Jackson picked off a pass at the 3-yard line late in the third quarter before Brown sealed the win with his interception in the end zone in the final minute.

Lindsey said the Jaguars, who had 15 penalties in the game, will have to correct a few mental errors before next week’s test against Hoover. 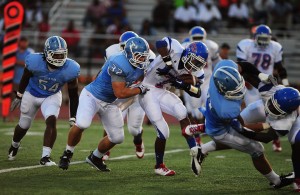 “We’re a work in progress,” Lindsey said. “No doubt about that. We’ve got a long ways to go.”

Despite several newcomers in the starting lineup for the Bucs, Mullens said Spain Park won’t underestimate Hoover next week.

“Everybody says Hoover is down this year, but they’re always good,” Mullens said. “We’ve got a big test ahead of us. I think everybody is looking forward to it.”

Eagles down rival Bulldogs in opener