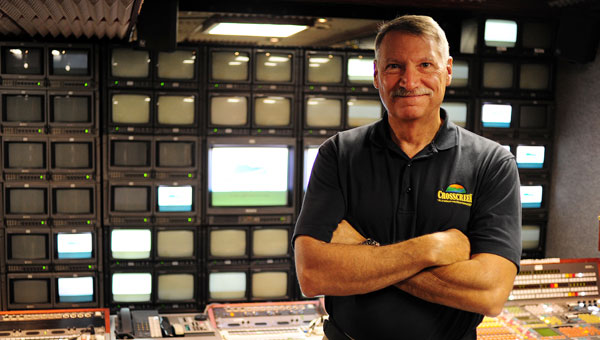 Millions of viewers from all across the country tuned into ESPN’s Aug. 27 live nationwide broadcast of Hoover High School’s football matchup with South Panola High School. And it couldn’t have happened without one of Alabaster’s “quiet” business mainstays.

“If you watched that on ESPN, that was all us,” Spruce McRee, president and chief executive officer of CrossCreek TV Productions, said of the broadcast. “We are a quiet operation in Alabaster, but we broadcast stuff all over the country.”

Whether it’s a broadcast of National Hot Rod Association drag racing, horse racing or Southeastern Conference sporting events, chances are high the broadcast is being handled by the company off Airpark Court in southern Alabaster.

Through contracts with ESPN, the Speed Channel and regional networks such as CSS and Fox Sports South, CrossCreek Productions travels throughout the country to broadcast some of America’s biggest events.

“It’s not just the Southeast, it’s definitely coast-to-coast. I may have a truck on the west coast, the Southeast and in New England on any given day,” McRee said. “We even do some international events, like going to Jamaica for Billy Graham.”

The company’s biggest client is ESPN, with which CrossCreek has an exclusive contract to broadcast all NHRA drag races aired on the station. Over the next few weeks, CrossCreek will broadcast the Alabama vs. Kent State and Auburn vs. Mississippi State football games.

When the company began, many of its clients broadcast primarily in standard definition, leading the company to compile a fleet of three self-contained mobile broadcast units housed in an 18-wheeler truck.

But as the years have marched on, more and more networks have moved to high-definition broadcasts. Three years ago, the company added its first high-definition mobile broadcast unit: Voyager 8.

“That first truck was extremely hard to build, even with a big contract,” McRee said, noting the company added another HD truck, Voyager 9 shortly thereafter. “Voyager 8 cost us about $8 million to build, and Voyager 9 cost us about $7 million.”

The first two Voyager units, which both contain hundreds of pieces of high-end media production equipment, are capable of broadcasting the highest-profile events for any television network, McRee said.

CrossCreek is currently constructing Voyager 10, which likely will cost the company about $6 million. The new unit will feature the same infrastructure as Voyager 8 and 9, but will not contain as much full-time production equipment.

“The infrastructure is the same as the first two trucks, so it will be easy to add more equipment as our clients need it,” McRee said, noting the Voyager 10 is set to be operational by Dec. 1.

After the new truck is operational, McRee said the company will look to convert its standard-definition trucks to high-definition.

“It’s cool to see your work broadcast on the big networks. But for us, it’s really just day-to-day work,” McRee said. “We’ve covered four or five Super Bowls, three World Series, you name it. We’ve been at a lot of high-profile events.”