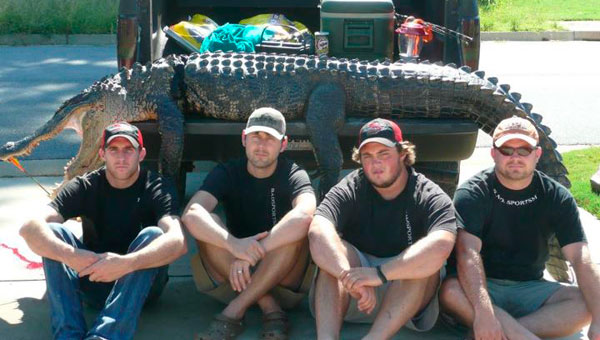 When 2010 Pelham High School graduate Cory King and three of his friends began battling a 12-foot, nearly 700-pound gator in Lake Eufaula late Aug. 27, they knew they were in for a fight.

King, who previously played for the PHS football team, and his hunting buddies Russ Hardwick, Kyle Barefield and Marcus Collins, had already put in more than 100 hours on the lake attempting to grab a monster alligator during the state-sanctioned hunt.

“You can only hunt alligator in the night time here. That show Swamp People is so inaccurate. I think they re-enact things and dramatize them,” King said. “When you get out there on the boat and shine a light on the gator, it will shoot off and then pop up 100 yards away.”

Because the four friends recently helped found the B.A.D. Sportsman wildlife film production company, which is planning to develop a hunting television show in the future, reeling in a monster gator would have helped the company get the jump-start it needed.

But after dozens of hours with no luck, the crew was beginning to become doubtful, King said.

“We actually caught a 5-foot alligator earlier, but we had to throw it back because they have to be 6 feet or better,” King said. “Before we went back out that (Saturday) night, we found a lucky penny in the Mexican food restaurant parking lot. So we knew something was going to happen.”

The crew was on the water for more than four hours when they spotted the enormous animal.

“We couldn’t get very close to him, so we turned the spotlight on him and tried to hit him with a treble hook,” King said. “Kyle started reeling it in, and he said ‘My hook is caught on a stump.’ Then, the stump took off running and dragging the boat with it.”

The quartet then hooked the gator with another treble hook, causing the first hook to fall out. After the hunters hit the gator with four arrows, the animal started rolling before it broke one of the fishing lines.

“You can imagine how crazy it was. That thing was like a concrete stump,” King said. “We got his tail up on the boat, and he started swinging it. It almost knocked all of us out of the boat before we were able to hit him with a shotgun.”

After the group got the gator on shore, the men tried to lift the animal over their heads to take a picture.

King said, through his involvement with B.A.D. Sportsman, he hopes to continue to experience more adrenaline-pumping hunting trips. To read more about the group’s hunts, visit Badsportsman.com.

“I’ve hunted deer my whole life, but my adrenaline has never been pumping like it was when we were fighting that gator,” King said.