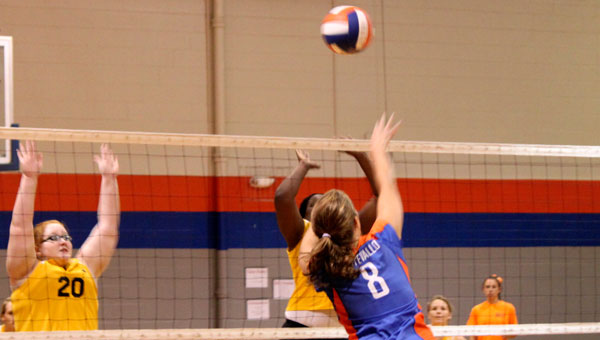 Montevallo (6-0) started strong in the first game, going up 5-0 with senior setter Kathryn Ray serving. The Bulldogs never lost control of the game, winning 25-14.
The Wildcats struck first during the second game, going up by two to start, and the two teams rallied until Montevallo regained control, taking the game 25-15.

Game three proved a constant rally, as both teams went back and forth. With senior Alicia Glover serving, Montevallo surged ahead, scoring nine straight and taking a nine point lead over the Wildcats. Hale County attempted to come back, but the ‘dawgs were too much for the ‘cats to handle.

“That feels really good,” senior Mallory Anderson said of the team’s 6-0 record. “We had a good season last year, but this year feels pretty good”

Anderson, who recorded 13 kills and 11 digs, believes her team has what it takes to make it far this season.

“We really want to make it to the Elite Eight,” Anderson said. “We got one game away last year, and it was during our homecoming week.”

While head coach Tena Niven is proud of her team’s success, she wants to her team become more dominant.

“It’s not making the unforced errors or not waiting on the other team to make errors,” Niven said. “It’s more of us taking control of the ball game. That’s what I’m looking for right now.”