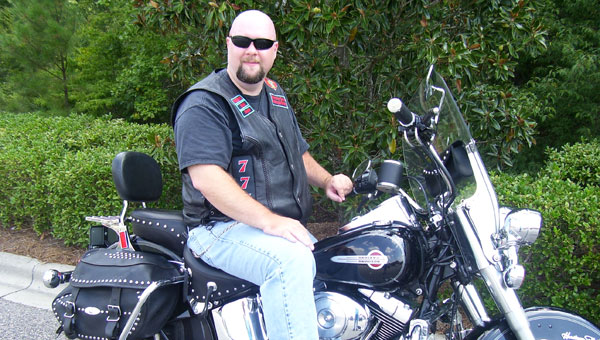 “I was searching for freedom at an increased speed, fueled by events of 9-11,” said Heath Holifield.

“Eagles, American flags, motorcycles, rock-n-roll lifestyle, things commonly associated with freedom,” were all a part of his search, he said. “No stone was left unturned, and all I ever found was deeper levels of bondage and pain…”

“There’s only one place true freedom can be found,” he said. “That’s at the cross (of Jesus).”

It was about four years ago that he met Jesus, Holifield said, and learned that freedom is spiritual, not physical.

This new, real freedom came about as “a result of crying out to Him,” he said. “I was at the end of my rope. I needed help that the things of the world can’t offer. Psalm 28:6 says ‘Praise be to the Lord for He has heard my cry for mercy.’ Everything the Bible says is true. He hears our cries and answers.

“He (Jesus) took the desires of my heart and cleansed them with His righteousness, and instead of riding on my hog living the rock-n-roll lifestyle, I ride with my brothers from Bikers for Christ proclaiming the freedom of the Gospel of Jesus Christ.”

Today Heath Holifield is chaplain of Bikers for Christ (Birmingham chapter). I first met him after my daughter chased him down in downtown Chelsea. Noticing the large Bikers for Christ patch on the back of the big, leather-clad guy riding the big, black Harley, she thought he might make a good subject for my column. So she followed him into Winn-Dixie parking lot and got contact information for me.

The ministry is aimed at the greater Birmingham area, he told me.

“We want to claim as large a radius for God’s kingdom as possible,” he said.

Plans are in the works for a Christian bike rally and a benefit ride. Official “Patch Dedication” will be held Sept. 9 at the Birmingham Dream Center, a Church of the Highlands mission center.

Persons interested in joining the Bikers for Christ Ministry or having a member as a speaker may contact Chaplain Heath Holifield at 999-5979 or freebyrd01@hotmail.com.

A mission to Renton, Washington