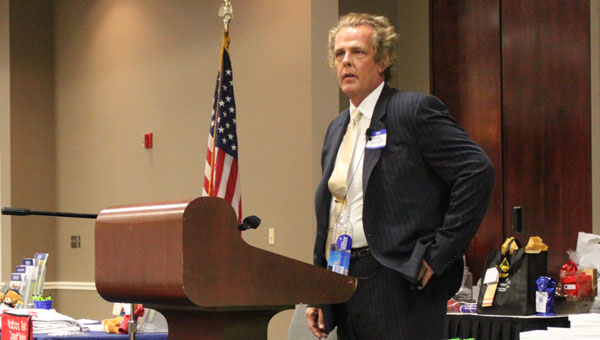 Several limitations are preventing America from utilizing high-speed rails as a viable public transportation option, a longtime railroad businessman said as he addressed the Greater Shelby Chamber of Commerce Aug. 31.

“The issue at hand today, as the population grows, is high-speed rail. I have three concerns about high-speed rails that I call the three Cs: Cost, crossings and curves,” Boatright said, noting most high-speed trains travel between 120-150 miles per hour.

Most freight trains travel between 60-70 miles per hour, he said.

Boatright said it currently costs about $1 million to lay a mile of railroad tracks, and said liability insurance costs for a high-speed railroad is significant.

“The liability insurance is high. When a train is going 150 miles per hour and it derails, people are going to die,” Boatright said. “With the recession the country is in, it’s been kind of a quiet topic lately.”

Boatright also said high-speed trains would require curves on many existing railroad tracks to be reworked to handle the increased speed.

“Rails are designed to be as straight as possible from point A to point B, but there are curves,” he said. “To go 150 miles per hour, you would have to increase the elevation of those curves by 4 or 5 inches.”

Because high-speed trains shoot through railroad crossings much quicker than freight trains, Boatright also said they could present a safety issue, especially in highly populated areas such as Birmingham.

“If you have been to Europe and ridden their trains, you are in the countryside. They did the best they could to keep the public out of harm’s way. Safety is one thing that concerns me the most,” Boatright said, noting a high-speed train comes to a crossing with less notice than a freight train.

Boatright also said a city such as Birmingham would have to install a public transit system to support a high-speed railroad terminal.

“If a high-speed train comes from Atlanta to Birmingham and 500 people get off the train, how are you going to move those people from the depot to where they want to go?” Boatright said. “We’ve got a lot of work to do.

“The population is going to keep growing, and we are going to have to come up with something to move people,” Boatright said. “What’s the answer? I don’t know.”