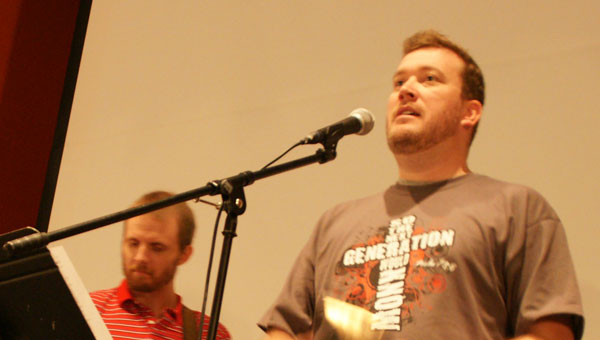 “He had the heart to be the pastor of a stand-alone church,” Gordon said of Hicks.

When the economy suffered, Hicks moved his family to Atlanta to follow his full-time job.

“The church struggled,” Gordon said. “It was never constituted as a separate church.”

“(On July 17, 2011) we voted to partner with Mountain Valley,” Westwood Montevallo’s new pastor, Corey Stewart, said. “It was a church plant of Westwood that never became an autonomous church. They were heading in that direction, but never quite got there. We really wanted to continue the work he (Hicks) started.”

The church became a multisite for Westwood, similar to the Calera campus. It’s a video venue, where sermons by Pastor Les Hughes in Alabaster are recorded and shown at the Montevallo site on the same Sunday.

“My role, I oversee the campus, and I serve as a shepherd for the local congregation,” Stewart said. “We will have live worship, and we’re still in the process of getting all that together.

“We haven’t launched yet,” he added. “Our official launch date is Oct. 30. Because of the unique opportunity we had with Mountain Valley, we’re ramping up for our launch date.”

Stewart graduated from the University of Montevallo and met his wife while in school.

“I feel a connection to the people of Montevallo and love the town and the culture,” he said.

Stewart said he wants Westwood Montevallo to be a place of community.

FROM STAFF REPORTS University of Montevallo baseball head coach Chandler Rose announced the signing of 19 recruits for the 2012... read more