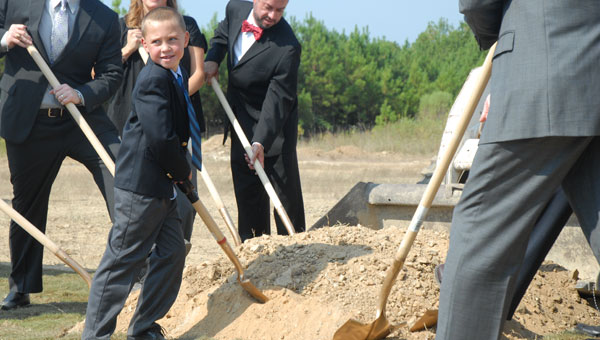 A new Christian preschool in Pelham likely will bring about 40 new jobs and could serve nearly 200 students once it opens next year, school officials said during a Sept. 2 groundbreaking ceremony.

Officials with Covenant Classical Christian School, which currently operates campuses in Huntsville and Hoover, said the new Pelham campus, which will be across Huntey Parkway from the Pelham Towne Center shopping center, is set to open in spring 2012.

“I feel this is very historic for our school, and for our city,” said Covenant Christian School Chief Executive officer David Sheram. “We are so excited to be here.”

The school’s current campuses have been “extremely successful” over the past several years, and have drawn high enrollment numbers, Sheram said.

“Even in a time of economic turmoil, we have been blessed to have economic growth,” Sheram said. “All of our schools are full, and have waiting lists.”

Ron Coriell, a pastor with the school’s school care division, said the Pelham location will be the school’s fifth campus in Alabama, which will mark the organization’s half-way point in its 10-year goal of opening 10 campuses in a decade.

“I think we are going to be able to open 10 campuses in Alabama in even less than 10 years,” Coriell said. “I hope that God blesses us with being the first Christian childcare chain in America. Right now, there aren’t any. All the other childcare chains are secular.”

Pelham Mayor Don Murphy said the new school will provide a boost to the city’s economy.

“God has already blessed Pelham many times over and over. This is another blessing today,” Murphy said. “This is going to help our economy out greatly, and it is going to benefit our community.”