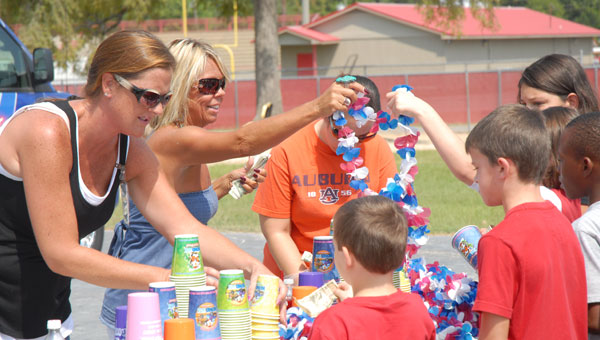 Students at Thompson Intermediate School kicked off the Labor Day weekend with a cool treat Sept. 2 while helping their teachers fund their classroom needs.

Kona Ice spent the afternoon at the school offering kids a variety of shaved ice treats after the students’ lunch periods. A portion of the proceeds raised during the event were donated to the school’s PTO, which will use the money to help teachers facing state education budget cutbacks.

“We try to do this every other week, as long as it’s hot outside,” TIS PTO President Ginger Ghabayen said shortly before a flood of excited children rushed to her table to pay for their after-lunch snack.

Last year, the Kona Ice fundraisers raised nearly $9,000 for the PTO, which the organization used to donate $225 to every teacher at the school to purchase classroom necessities, such as copies and instructional tools.

The PTO also used the money to give each teacher classroom start-up money for the current school year and purchase new chairs for the school’s technology department.

“All the teachers used to receive $500 a year from the state to use in their classrooms, but they don’t get that anymore,” Ghabayen said. “We try to have as many fundraisers as we can to at least give the teachers a little bit of money to pay for copies and things like that.

“If a parent doesn’t sponsor a teacher’s classroom, the teacher has to pay for all that on their own,” Ghabayen said.

Karla Butler, owner of Kona Ice, said she tries to help teachers at schools throughout the county as often as she can.

“When I was in school, you didn’t think about how a teacher got their supplies and you took it for granted. The state just always bought those, but they don’t anymore,” Butler said. “We try to help out all the schools whenever we can.”