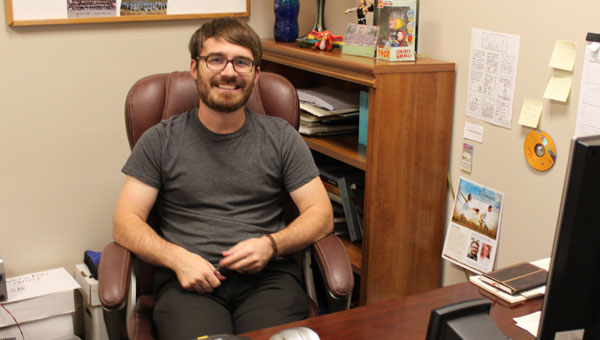 COLUMBIANA – Drake Roberts debated between becoming an art major or taking a religious path. As the new director of youth at Columbiana United Methodist Church, Roberts has found a way to incorporate his love of art with his new career.

“I attended Birmingham Southern for school and majored in art,” Roberts said in his church office, complete with an art table. “I enjoy the creative end of things and like plugging it in here.”

Roberts spent his first three years out of college as a loader for UPS.

“I realized that the blue-collar, corporate work was not what I wanted,” he said. “Youth ministry has always been a passion, so here I am.

“We hit the ground running pretty fast,” Roberts said of his new youth pastor position. “We already had things on the calendar. We took 25 kids to Ichthus, which was a four-day trip to Kentucky. I got to know the kids, but was kind of thrown into the fire.”

Roberts grew up in Sylacauga, so he’s “used to” small-town life, he said. He met his wife, Christine, in Sylacauga in 10th grade, when her family moved to the area. Roberts and Christine started dating in 11th grade and got married in July 2011. Christine works for UAB part time in the School of Public Health. The couple moved to Columbiana recently.

“We just taught him to sit, so that’s been fun,” Roberts said with a laugh.

“I loved Birmingham and loved living there, but I like small towns too. I like having a yard,” he added. “And I like that you can see more than three stars at night.”