Jaguars bucked by the Bucs 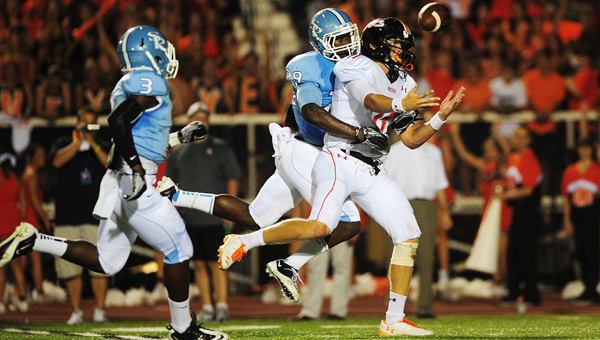 Spain Park defensive back Chris Humes forces a fumble against Hoover quarterback Sam Gilliken during the first half of the game Sept. 2. (Reporter Photo/Jon Goering)

HOOVER — Spain Park High School senior Reid Reinagel had been waiting for the Jaguars’ meeting with rival Hoover in the second game of the season Sept. 2 since a loss to the Bucs in the second round of the Alabama High School Athletic Association Class 6A playoffs last November.

Reinagel thought the 2011 season may mark the Jaguars’ first win over their rivals in school history.

Spain Park is still searching for its first win against Hoover following a 20-0 loss to the Bucs, but Reinagel isn’t giving up hope that it might still happen before the year is in the history books.

“I felt like we had the best shot (to beat Hoover) we’ve ever had,” Reinagel said. “I think we’ll see them again in the playoffs.”

A disruptive Hoover defense kept the Spain Park offense from finding its rhythm in coach Chip Lindsey’s first meeting against the Bucs.

Junior quarterback Nick Mullens completed only 21-of-39 passing attempts for 167 yards with two interceptions in the loss. Mullens said the multiple schemes the Jaguars faced from the Hoover defense kept them from putting together a scoring drive.

“They’re a good team,” Mullens said. “Hoover has a lot of tough schemes.”

Reinagel reeled in a team-high five receptions for 58 yards.

While the offense struggled, the Spain Park defense did everything it could to keep the Bucs off the scoreboard. Senior defensive back Chris Humes chased down Hoover quarterback Sam Gilliken and stripped the ball away as he was heading into the end zone for a touchdown.

The Bucs finally got on the scoreboard following a 2-yard touchdown run by Gilliken with 3:01 remaining in the opening half. Hoover carried a 7-0 lead into the locker room at halftime following the extra point by Larson Real.

The Bucs opened the second half with an 11-play, 86-yard scoring drive, which was capped by Real’s 35-yard field goal with 8:47 left in the third quarter.

Hoover sophomore Marlon Humphrey intercepted a pass by Mullens near midfield and returned it for a touchdown to give the Bucs a 17-0 lead with 4:37 left in the third quarter.

Hoover capped its scoring with Real’s 31-yard field goal with 9:20 remaining in the game.

Spain Park couldn’t muster more than one first down an any drive in the second half.

Lindsey said the Bucs were the main reason for the Jaguars’ struggles on offense.

“You’ve got to give a lot of credit to the Hoover defense,” Lindsey said.

Despite the loss, Mullens said he sees a lot of potential in his teammates.

FROM STAFF REPORTS The University of Montevallo volleyball team split a pair of matches on the opening day of the... read more