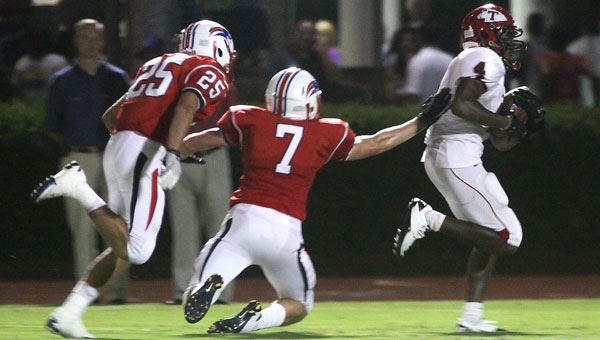 Thompson High School senior Avery Hale heads into the end zone for a touchdown in the Warriors' 24-14 loss at Homewood in their Class 6A, Region 6 opener Sept. 2. (Contributed/Eric Starling)

HOMEWOOD — The Thompson Warriors came up short on the road against the Homewood Patriots, falling 24-14 at Waldrop Stadium.

Coach Caleb Ross had just one message for his Warriors in the team huddle after the game.

“Keep your head up, it will come,” Ross said.

Mental errors and missed opportunities summed up the night for Thompson.

Homewood would get on the board early, taking advantage of a fumbled punt return by the Warriors. After moving the ball from the Thompson 24 to the 4-yard line, Justin Hardy scored on the hand-off to give the Patriots the early lead.

Thompson couldn’t get much going on offense in the first half. Quarterback Trey Matherson was pressured most of the evening. Late in the first quarter, a tipped Matherson pass was intercepted by the Patriots. That play began a 7-play drive that culminated with Stephen Baggett scoring on the quarterback keeper.

“Our offense just wasn’t prepared for this game,” Ross said. “Our defense did a great job keeping us within reach, and we just didn’t take advantage.”

Thompson’s longest drive in the first half began at their own 16-yard line and facing third and long on two separate occasions, the Warriors fought their way for first downs.

With first-and-10 at their own 49, Matherson hit Avery Hale down the sideline and Hale ran it in for a 51-yard touchdown strike. Matt Nall’s extra point made it 14-7 Homewood at the half.

The Patriots field goal with 5:47 remaining in the third quarter would be the only points scored in the frame.

A blocked punt in the fourth quarter by the Patriots would lead to their final score. The touchdown run and extra point gave Homewood a 24-7 lead with ten minutes remaining in the game.

With 3:20 remaining to be played, Matherson took the snap on his own 35-yard line and pitched left to Demetrius Alexander who scampered 65 yards for the score.

The Warriors host Vestavia Hills next week in their first home game of the season.

FROM STAFF REPORTS University of Montevallo baseball head coach Chandler Rose announced the signing of 19 recruits for the 2012... read more