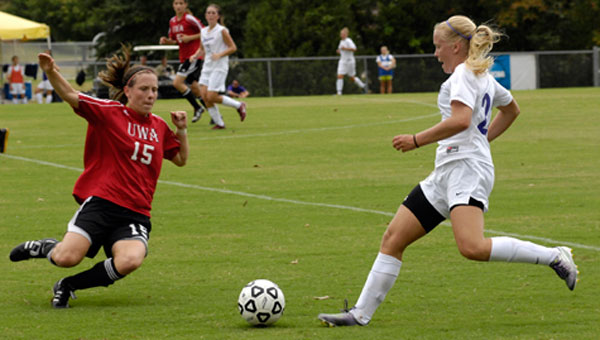 University of Montevallo freshman Camilla Alderin controls the ball in the Falcons' win over West Georgia in their first home match of the season Sept. 4. (Contributed)

The University of Montevallo women’s soccer team jumped on the Tigers from the University of West Alabama early and never let up as the Falcons dominated in a 5-0 win in their home opener Sept. 4.

Sophomore Christine Prince led the way with a pair of goals, including the opening goal of the contest.

Freshmen Melissa Bode and Camilla Alderin each chipped in a pair of assists.

The Falcons outshot the Tigers 22-3 and had a 14-1 advantage in shots on goal. Sophomore Kaitlin Thomas, junior Alyssa Maxwell and freshman Katie Mealer combined for the shutout in goal. Thomas played the entire first half, making the lone save in the game. Maxwell played just under 38 minutes while Mealer played the final seven minutes.

Sophomore Asgerdur Palsdottir helped get the scoring going as she sent a throughball to a streaking Prince, who was able to beat the keeper for a 1-0 lead just 4:23 into the first half. Freshman Aimee Godfrey struck just two minutes later as she sent a laser from 35 yards out over the keepers’ head to give Montevallo a 2-0 lead.

Alderin got the first of her two assists at the 34:00 mark of the first half as she sent a ball down the left side to sophomore Danielle Zak, who pushed the ball to the far post to give Montevallo a 3-0 lead.

Just three minutes later Bode found Alderin out wide of the box. Alderin sent a ball into the penalty area, where sophomore Taylor Kerr headed in the ball off the far post. The Falcons took a 4-0 lead into the halftime break as they held a 10-1 advantage in shots.

The second half was much more quiet offensively for the Falcons, as the lone goal came at the 78:59 mark when Bode and Kerr teamed up to send a ball across the box. Prince collected the ball and kicked it past a diving keeper.

Freshman Lyndsie Jacobs led the Falcons in shots with five, while Kerr and Prince each had four.

The Falcons will be back in action Sept. 9 at 4 p.m. as they travel to Flagler College for their Peach Belt Conference opener.